The first instalment of Fulbright Reflections for 2013 will be presented in partnership with City Gallery Wellington, coinciding with the gallery’s major new exhibition of kinetic works from experimental filmmaker, sculptor, poet, painter and “composer of motion”, Len Lye. Lye was one of the most internationally influential and recognised New Zealand artists of the twentieth century, and spent a considerable part of his career based in the United States of America. 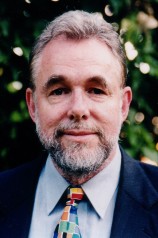 Roger Horrocks received a 1963 Fulbright New Zealand Graduate Award to complete a Master of Arts degree in English at the University of Minnesota.

After returning to New Zealand he worked at the University of Auckland, pioneering the teaching of contemporary American literature and the study of film. He was involved in the setting up of the Auckland International Film Festival, Alternative Cinema, Artspace, NZ On Air, NZ On Screen, Script to Screen, and various other organizations. He was a co-editor of the experimental magazines And and Splash.

Roger worked as Len Lye’s assistant in New York during the last year of the artist’s life and has since written a biography and directed a film about him, curated an exhibition of Lye’s art, and edited or co-edited three collections of his writings.

Roger is an Emeritus Professor of the University of Auckland and founding Head of its Film, Television and Media Studies Department. He has won various film awards and in 2004 was appointed a Member of the New Zealand Order of Merit for services to the film and television industries.

Michelle Menzies received a 2006 Fulbright New Zealand Graduate Award to complete a PhD in Literature at the University of Chicago. Her dissertation Archives of Experience: Toward a Digital Aesthetics argues a cultural history of digital aesthetics routed through the history of cinema, and analyses the aesthetics of movement in early film, contemporary art, modern poetry and the philosophy of Henri Bergson.

Michelle has a Bachelor of Fine Arts in Intermedia and Time Based Arts from the University of Auckland’s Elam School of Fine Arts. Her artistic practice is based in video, photography and installation. She was co-initiator and curator of the Window art project in Auckland, one of the first galleries in New Zealand to attempt a creative use of the internet through coupling physical and virtual exhibitions.

Michelle is Curator of Victoria University of Wellington’s Adam Art Gallery. She is a fellow of the New Zealand India Research Institute, and a reviewer for Flash Art and Artforum magazines.

Phil is a sound and intermedia artist with a transdisciplinary practice including video and sound installation, sound sculpture, construction of experimental musical instruments, music composition and improvised performance. He founded the original rhythm/performance group From Scratch in 1974, who perform with custom-built instruments made from industrial and natural materials. His kinetic sculptural works include Akau Tangi on Cobham Drive in Evan’s Bay, Wellington. In 2011 Phil was one of nine artists to travel on HMNZS Otago to the remote Kermadec Islands, resulting in a group exhibition at City Gallery Wellington from October 2012-February 2013. He recently travelled to Santiago, Chile for the opening of the Kermadec exhibition at Museo de Arte Contemporáneo.

Join these Fulbright alumni at City Gallery Wellington on Sunday 7 April, from 2:00-3:30pm, as they discuss Experimental Art – Motion and Sound.