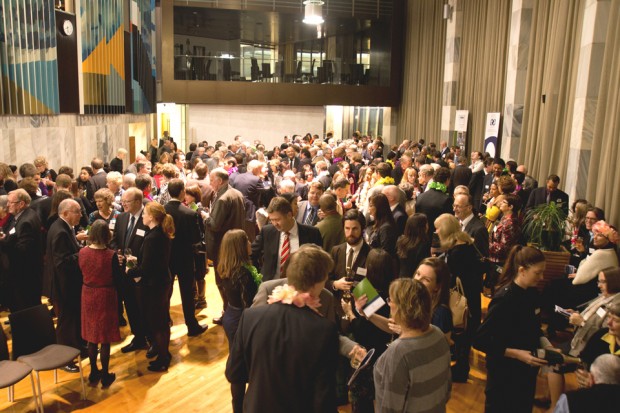 Around 300 guests attended a reception in the Beehive Banquet Hall at parliament in Wellington on 25 June to celebrate the 65th anniversary and recognise this year’s Fulbright grantees. The event was hosted by senior government minister Hon Steven Joyce, who in his speech said that “for 65 years the Fulbright programme has been the guiding light for students and leaders in New Zealand and the United States. It has been instrumental in forging longstanding and substantive bonds between our two countries and has more than fulfilled Senator Fulbright’s vision of promoting friendship, knowledge and understanding.”

Hon David Huebner, US Ambassador to New Zealand, echoed Minister Joyce’s tribute to the Fulbright programme as a long-standing example of bilateral co-operation and an important driver of academic excellence and leadership in the two partner countries.

A panel of alumni from across the decades spoke, including 2008 Fulbright US Graduate Award recipient Siobhán O’Kane, who noted that “Fulbrighters are bound together by a special enthusiasm, passion and curiosity, and big bold ideas. A Fulbright award is not a one-off reward. It’s the seed of a lifetime of enrichment through story-telling, knowledge building and the support of a powerful network.” In the awards ceremony portion of the event, 53 of this year’s Fulbright grantees (from a record cohort of 83) and three Ian Axford (New Zealand) Fellows in Public Policy were honoured in person for their achievements. 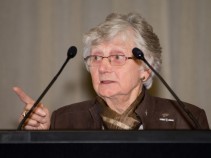 “I won a Fulbright travel grant in 1952 which took me to Vassar, a women’s college in New York state. In 1952 women were advised to only apply to women’s colleges, we could only get a two year student visa and there were currency restrictions out of New Zealand. I remember being cross-examined by a secretary of the US Embassy as to why I wanted to attend such a socialite college. The answer was simple – they offered me the most money!

My US experience set me on my career path. The subjects I took and the research that I did, resulted in my appointment as a scientist in a newly established freshwater research unit and ultimately to my appointment as the first Parliamentary Commissioner for the Environment.

I made lots of friends, some of them have since visited New Zealand and some have gained influential positions in USA. Their knowledge of New Zealand has to be a plus. (As an aside they also taught me how to play bridge!)

Being a Fulbright grantee opens many doors, and this was very advantageous later in my career. The value of the cultural exchange and the people you meet from a Fulbright exchange cannot be underestimated. I hope we all give generously to keep the program going.”

In 1970, I was encouraged by a Fulbright alumnus, Rene Walter, to apply and with my wife Judith and two small children (aged 3 and 5 years), I taught 6th Grade in an elementary school in Farmington, Michigan (a suburb of Detroit) as a Fulbright exchange teacher.

In 2004, I received a Fulbright travel grant to speak at a major conference in Atlanta, Georgia – the 18th Annual Conference of the American Evaluation Association – presenting a paper entitled ‘Towards a Culture That Values Evaluation: Ideas From and For New Zealand,’ and to update myself in the field of institution and programme evaluation. They were different but very rich experiences.

In 1970, I was a young teacher who had never left New Zealand. As a young family, we immersed ourselves in daily life and many of those relationships endure today. For us, the experience was life-changing. Between us, Judith and I gave 40 speeches to various community groups. Beyond my classroom, I encountered curriculum developments in sex education, drug education and racism, to name a few areas that later came to the fore in New Zealand. As a teacher, I certainly gained in confidence and motivation and cemented a genuine long-standing love of teaching. The Fulbright year ignited my career, firming my decision that tertiary teacher education would be my realistic goal. I also acquired a lifelong interest in and awareness of the US.

In 2004, I was at a very different career stage. The travel award was vital in significantly deepening my knowledge of evaluation – a field that was becoming increasingly important in New Zealand education and many areas of public life. After the conference, I was able to travel and establish personal links with the key figures and university programmes in the field of evaluation in USA. I had begun Massey University’s Postgraduate Diploma in Evaluation and the knowledge certainly enhanced that programme and my leadership of it.

Since 1970, there was always an underlying awareness that Fulbright had given me wonderful (more like ongoing) professional and personal benefits that underpinned both life and career, for which I am continually grateful. The confidence in one’s ability, the raised horizons and international perspective carried me through the next 43 years, right up to last week. Fulbright was a major influence on my life (and our family’s too). I’m sure many people in the room fully understand what I mean. I’m also touched to have been part of a Fulbright selection panel for teachers in recent years. I believe that, as alumni, we have much to be grateful for, after our experiences and opportunities. Our interest and support provide important validation to the programme and our tangible contributions at this 65th anniversary are even more timely and appreciated in today’s tough economic climate.”

“We all have those fleeting moments in our lives that stand out as true game-changers. For me, one of those was in a New York City café in 2006. I was talking with my university supervisor about my career in environmental planning when she asked ‘If you could do anything, what would you do?’ To this I said, without hesitation, ‘I would go to New Zealand.’

The second of those important moments was when a letter arrived in the post letting me know that in 2008, Fulbright New Zealand would give me that chance.

My name is Siobhán O’Kane and I spent a year at Waikato University studying water management – a year in which I became a sponge, soaking up every moment and opportunity for learning with eyes more widely-opened than during any other part of my education.

Five years on and, notably, still in New Zealand,  I still say to people that that my Fulbright experience was the most transformative year of my life, informing the path I am now on.

I often reflect on what seems like a great irony – that for me, a person from New York, where people like to say ‘all the world meets’, it was actually New Zealand that brought me the rest of the world. A world of different perspectives, a chance to explore outside the standard frameworks of everyday work and build relationships with people from all walks of life.

As Auckland co-ordinator of the Fulbright New Zealand Alumni Association I’ve enjoyed working alongside other alumni. Fulbrighters are bound together by a special enthusiasm, passion and curiosity, and big bold ideas. The Association, with members from all six decades, reinforces for me that a Fulbright award is not a one-off reward. It’s the seed of a lifetime of enrichment through story-telling, knowledge building and the support of a powerful network.

I encourage all of my fellow alumni to join and to support Fulbright New Zealand.”

“Good evening everyone. I would firstly like to congratulate all of this year’s grantees – congratulations and welcome to the Fulbright community!

There are three things I want to convey about the benefits I have gained from my Fulbright experience:

Firstly, being awarded the Fulbright scholarship greatly enhanced my chances of being selected into one of the leading research programs in my field. I now work in future planning for wireless communications in New Zealand, as a direct result of the experience I gained on my Fulbright exchange.

Secondly, the programme has given me (and continues to give me) an amazing network of friends and colleagues. This network is just invaluable, and I have learnt so much from it.

Thirdly, it’s opened up opportunities I would otherwise not even have heard about. I recently attended the US-NZ Pacific Partnership Forum in Washington, DC as a Fulbright alumni in the New Zealand delegation and had the most amazing experience – being involved in high level bilateral discussions on trade and security as well as collaborating with young leaders from both countries! So the opportunities from being in the Fulbright programme don’t just end after your exchange. It’s a community where you can continue to have an impact long after completing your exchange.

Finally, I strongly encourage alumni and others to keep supporting the Fulbright program so that other capable and deserving New Zealanders can get the opportunity I was fortunate to receive. Just like I and my fellow alumni have mentioned here, our Fulbright experiences have created unique opportunities, brought our two countries much closer together and has led to lasting success for the programme.

Thank you and enjoy the evening!”