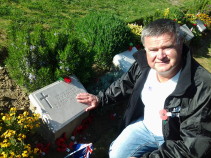 The story of New Zealanders at Gallipoli in the First World War is well known, but who were these soldiers? Where did they came from, what motivated them to enlist and follow through the training that led them to Gallipoli in 1915? Well-known military historian and Massey University Professor of War Studies Glyn Harper explores the experiences of Kiwi soldiers at this free Fulbright New Zealand seminar.

“In my research for a new book, I have reviewed more than 2000 letters and diaries, most of which have not been accessed before. They included accounts of what the soldiers saw, where they slept, what they ate and what they felt,” says Mr Harper.

About Glyn Harper
Mr Harper received a 2010 Fulbright New Zealand Senior Scholar Award to research the Battle of Monte Cassino towards a book project, at Virginia Military Institute and the US Army War College. He is Professor of War Studies at Massey University in Palmerston North. Massey’s Project Manager of the Centenary History of New Zealand and the First World War and former teacher, he joined the Australian Army in 1988 and after eight years transferred to the New Zealand Army, where he rose to the rank of lieutenant colonel. Glyn was the army’s official historian for the deployment to East Timor.

He is the author of numerous history books which include Kippenberger: An Inspired New Zealand Commander; In the Face of the Enemy: The complete history of the Victoria Cross and New Zealand; Dark Journey: Three Key Battles of the Western Front; Images of War: World War One: A Photographic Record of New Zealanders at War 1914-1918 and his most recent, before Johnny Enzed being The Battles of Monte Cassino. He has written ten children’s books, of which Roly the Anzac Donkey and Jim’s Letters are the most recently published.

Please arrive from 5.15pm for a 5.30pm start. Refreshments will be provided. Please click here to register.