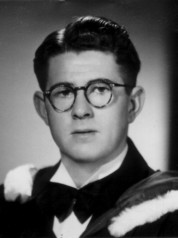 Michael Martin-Smith from Lower Hutt was a 1951 Fulbright New Zealand Graduate Student at the University of Rochester, as part of the third ever cohort of New Zealand Fulbrighters to the US. Now retired to the UK, he still has fond memories of his exchange experience almost sixty years ago.

My Fulbright experiences began on August 16th 1951 when, full of the optimism of youth and with high hopes of contributing to a better world in the aftermath of World War II, I sailed with five other Fulbrighters from Wellington to Panama on the Ruahine. On our subsequent flight from Panama to Miami the aerial views of islands set in the sparkling Caribbean Sea were breath-taking. In Miami the temperature was in the thirties centigrade and entry into our hotel provided my first encounter with air conditioning. It seemed like stepping into a refrigerator, whilst going out into the street again, with my glasses steaming up, was like entering an oven.

Those of us who were proceeding to universities in the north-eastern states travelled to Washington DC by Greyhound bus, finding that Tannoy public address systems did nothing to help us understand the accents of the American south. At the beginning of each stage of the journey we had to speak directly to the drivers to ensure that we were catching the right bus.

In DC we decided to phone up Senator Fulbright’s office and thank him for his sponsoring the act that made our presence in the US possible. His secretary asked us to wait whilst she conveyed our appreciation to the Senator. When she came back on the line she said that he wished to receive us at his office that afternoon and that he was dropping his other appointments to make this possible, so we all trooped over to Capitol Hill to thank Senator Fulbright in person. There we learned that we were the first Fulbright students that he had met and the first to think to express their thanks to him. After our audience, his office laid on a party that evening and we had our first experience of escorting a “date” home, which was somewhat of an undertaking as we hadn’t the faintest idea of the geography or transport system of the US capital!

The whole of my time in Rochester was most pleasurable and productive. There was a very close relationship between “Town” and “Gown”. There was an extremely active women’s group who took foreign students under their wing and organised picnics and day trips throughout the area. I was made an honorary member of the Delta Upsilon fraternity by undergrads to whom I was demonstrating in their chemistry labs and this gave me a full social life.

As I first settled in, I quickly became bilingual and learned not to ask the Chemistry Department secretary for a rubber when I had occasion to erase something I had written, not to invite a girl for a knock-up at tennis, nor, in apologising for a late appearance at an appointment, to say to those awaiting my arrival that I hoped they didn’t think that I had come to a sticky end.

Canoeing became a favoured leisure time pursuit and on one occasion it had an unexpected consequence. Despite my considerable experience on Auckland harbour as a boy, I managed to can out into the river wearing my non-waterproof wristwatch. I rushed downtown to a watch repairer who said he could sort it out. He then remarked on my accent and when I told him I was a Kiwi, his face lit up. During the war, as a schoolboy, I had witnessed the transit of a great number of American servicemen through Auckland but up to that time had met nobody in Rochester who had been in New Zealand. When I came to pay, the watchmaker refused to accept anything. He said that he had been badly shot up on Guadalcanal and invalided out to New Zealand where people had been extremely good to him, and now it was his time to reciprocate.

As a foreign student, I was offered numerous speaking engagements, participated in a number of radio programmes and appeared on television several times. TV was, of course, a great new experience for me, New Zealand at that time being an undeveloped country with respect to the invention of John Logie Baird.

While based in Rochester, I managed to visit 47 of the then 48 states. I thus had a broad exposure to many different aspects of life in the USA and I made many close friends. I always found the Americans to be friendly, generous, interesting and interested, but the existence of an underbelly of severely underprivileged people was always evident.

On the professional side I gained invaluable experience, which stood me in very good stead in both my university teaching and research and in my work in the pharmaceutical industry. I had the good fortune to be intimately involved in all the stages from discovery to market of the multi-billion dollar product – the anti-ulcer drug, Zantac® (ranitidine hydrochloride). In work and play, it has all been fun!