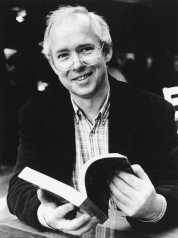 Bill Manhire from Victoria University of Wellington was the Fulbright Visiting Professor in New Zealand Studies at Georgetown University’s Center for Australian and New Zealand Studies in Washington, DC for their Spring semester of 1999. Having recently been appointed New Zealand’s inugural poet laureate, he took every opportunity to promote New Zealand literature on campus and off.

I taught New Zealand Literature at Georgetown University from early January 1999 through May of the same year. I remember that we arrived into an ice storm – this was not only exciting, it was also one of those reality checks: till then I had thought that ice storms happened only in movies. We also arrived into the Clinton impeachment process, which also had its excitements.

The course I had proposed at Georgetown was called “Life after Mansfield”. It was very well subscribed – there were nearly 50 very enthusiastic students – partly because I hadn’t realised that the Georgetown class limit was 35, and no one had thought to tell me. Still, it was nice to be popular. I had taken some tourist videos with me, and friends had also lent me a video collage of television advertisements, and so I was able to show the American students New Zealand’s fantasy about itself and then follow with some evidence of standard Western commodity greed.

Of course, that move from the ideal to the real, from what you hope for to what you get, has been the device of much New Zealand poetry and fiction and film. Many of us will remember the start of the film of Once Were Warriors, where the camera cuts away from beautiful natural scenery (which turns out to be on a billboard) to a motorway, and the life beneath the motorway. We watched that film, along with one or two others; and we read a wide range of work by New Zealand poets and fiction writers.

I did a range of things beyond the classroom, too. For example, I gave the ANZAC Day address at the New Zealand Embassy, as well as several poetry readings and a lunchtime lecture on “Antarctica and the Imagination” at the National Science Foundation. I should also admit that the train ride to New York, which I took regularly, was a very satisfactory thing.

I was in the last months of my poet laureateship, so I enjoyed meeting over dinner my then American equivalent, Robert Pinsky. I also enjoyed attending the regular readings which the US laureate curates at the Library of Congress. I had taught American poetry at Victoria University for many years, and as a writer I’m a member of that generation of New Zealand poets whose sense of possibility was transformed by exposure to US poets. I think particularly of Walt Whitman – of his “barbaric yawp” (and its implicit advice that poets need not be polite and tepid); of his encouraging lines “Do I contradict myself?/Very well, I contradict myself,/ (I am large, I contain multitudes”; and of his notion that a poem could be both a bit of a rant and a conversation.

So it was good to be in the midst of contemporary American poetry. Yet even though we were there for only five months, the greatest gift of the Fulbright was the extended period of time we were in the States. You get a feel for the rhythm of American life, the pattern of the year, the way the seasons behave and public holidays fall, which is very, very different from the sense of America you get if you visit as a tourist, or for a conference; or which comes at you constantly from television and other parts of the media.