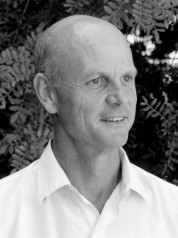 Bob Norris was an Assistant Professor of Geology at the University of California, Santa Barbara when he received a 1961 Fulbright US Research Scholar award to research the mineralogy of deep sea marine sediments of the Chatham Rise, east of New Zealand’s South Island. 50 years later, he reflects fondly on the Fulbright exchange that fulfilled a childhood dream to visit New Zealand.

A few weeks ago, I realized that it was fifty years ago that my family and I arrived in Wellington to start a year as a Fulbright Senior Research Scholar at the New Zealand Oceanographic Institute, part of the DSIR. This led to a lifetime of rewards, friendships and even an Australian daughter-in-law! As 90-year-olds are prone to do, I got to thinking of the chain of events that led to my arrival in Wellington on the P&O’s Canberra in the midst of a wild southerly storm.

It all began about 1937 or 1938 when I was a high school student in California’s San Fernando Valley near Los Angeles. One of my teachers had visited New Zealand when M. J. Savage was Prime Minister and much social security legislation was being enacted. She used every opportunity to extol the country’s government as well as the beauty of the landscape. I mentally filed her advice away, but as this was in the Great Depression, it was pretty much an idle dream. As a practical matter, I knew that foreign travel might be limited to Mexico and with some luck, Canada.

Fast forward to 1960 when I was a junior Assistant Professor of Geology at the University of California, Santa Barbara. That year we were inaugurating a new Chancellor and the Administration decided to make a real ceremony out of the occasion with a full scale academic procession. Leading American and foreign universities and “learned societies” were invited to send representatives who were expected to come in full academic dress. For reasons never clear to me, the Sigma Xi, a science Honorary Society of which I was a very junior member, asked me to be their representative.

Participants in the procession, all in colorful academic gowns, were arranged in order of their institution or society’s date of founding. Sigma Xi was founded in 1886, just about the time the University of New Zealand was established. As a result, I found myself next to Professor Gordon Williams of the Otago School of Mines, representing the then University of New Zealand as he was currently on a sabbatical leave at Stanford University in California. In making small talk, I told him that I had always wanted to visit New Zealand after hearing what my enthusiastic teacher had said many years ago. “Well, why don’t you go?” said Professor Williams, not one to mince words. “Because I have a wife and three little kids and a modest Assistant Professor’s salary,” I replied. “That shouldn’t stop you. There are many agencies that support study leave and provide travel costs. Look into it,” he responded.

A couple of months after this encounter, my mail included an announcement seeking applications for Fulbright Senior Research Scholarships open for 1961-1962. One of these was at the New Zealand Oceanographic Institute in Wellington. Although I didn’t feel I was any sort of a “Senior”, I did have degrees in geology and oceanography and had served in the navy in World War II, so I sent in an application. In due course, to my astonishment, I received word that I was now a Fulbright Senior Research Scholar and had funds for travel, housing and general living expenses.

During the six months prior to coming to New Zealand, I subscribed to the two Wellington daily newspapers in succession. I found this was a good way to get a preview of the city and its daily life. One particularly helpful thing the Fulbright program did was to put me in touch with two New Zealand scientists in southern California on Fulbright grants, R. Morrison Cassie and John Yaldwyn, both from Wellington as it turned out. My wife and I invited them to come to Santa Barbara for a weekend and we had two delightful and informative visits with them and their wives.

Fortunately, however, there is no substitute for experience and we still found many little surprises once we arrived in Wellington. For one thing, the weather was better than any source of information including the newspapers had led us to believe! The pleasure of discovering these sorts of things should not be denied to anyone.

A few months after we had settled in Wellington, we decided to do a camping tour of the South Island and I was determined to find Professor Williams to thank him for his advice and encouragement to organize a trip to New Zealand. I contacted Otago University and found he was evaluating an oil shale deposit in the Nevis River Valley in Central Otago. They gave me directions to his probable location. Off we went in our little Morris Minor station wagon, all five of us crammed inside, with camping gear on the roof rack. At Cromwell, we were directed to take a rather hair-raising steep gravel road over the Carrick Range and down into the Nevis River Valley. Otago University’s directions turned out to be spot-on and we had an enjoyable picnic lunch on the banks of the Nevis River with Professor and Mrs. Williams, a fine setting to thank him for the inspiration he gave me to seek what turned out to be a Fulbright award.

The dividends from the Fulbright year cannot be exaggerated. I have spent three more productive sabbatical years in Wellington, our kids have profited from their New Zealand school experience, and we now have friends from Dunedin to the Bay of Islands, many of whom have visited us when they were on our side of the Pacific. Finally, we have had a chance to explore New Zealand from North Cape to Stewart Island and out to the Chathams. How could you beat that?