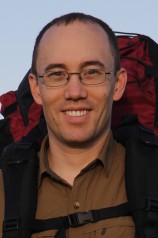 Sándor Lau from Dover, New Hampshire was a 2000 Fulbright US Graduate Student at the University of Auckland, where he completed a Bachelor of Arts (with Honours) in creative writing. Sándor ended up spending seven years in New Zealand, during which time he made two documentary films.

I grew up as a kid with a funny name and mildly eccentric personality in a small town in Colorado, without much of a feeling of belonging in my own country. If there was ever any division of us and them, I would always end up on the “them” side and consequently took a great interest in all things foreign, especially film. After spending half of my undergraduate education studying abroad, I landed in Auckland in 2000 with a Fulbright award to pursue graduate study in film and writing. Half of my work as a writer and filmmaker is being a private detective of human nature. One year certainly wasn’t enough to get to the bottom of what New Zealanders are about, so my one year of study at the University of Auckland turned into three. 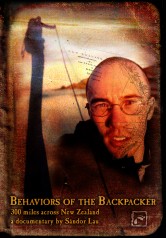 Behaviors of the Backpacker DVD cover

To make my Masters thesis film Behaviors of the Backpacker I walked from Auckland to Cape Reinga with a camera and a backpack, following the stories of fellow outsiders and their own quests for a place to call home. The people I met opened their souls and entrusted me with their stories, in part because they could tell an outsider things they couldn’t tell their own people. The trust they showed me as an outsider made me an insider for nearly the first time in my life. Though I would later get a passport to make it official, it was while walking from Auckland to Cape Reinga that I became a New Zealander.

Travelling 500km on foot was no walk in the park, but the rewards of the people I met more than made up for the sore feet, dangerous motorists taking their piece out of the curb, and the occasional need to swim across a river in the middle of winter. My new friends taught me how to catch eels by hand and sing new songs and say new words, but most importantly, they taught me that having a funny name and mildly eccentric personality was my ace in the hole.

One of my favorite Māori proverbs I learned on the journey was that you spend your life walking backwards, not forwards, because you can only see the past behind you, not the future ahead. It came as a great surprise to me after Behaviors of the Backpacker played on television, when New Zealanders said with pride “That’s our boy. He’s one of us.” It came as an even bigger surprise when people in my hometown in Colorado saw the film on TV and said the same.

Virtually all of my work in New Zealand – my writing, my stories as a TV reporter on Asia Down Under, and my films Behaviors of the Backpacker and Squeegee Bandit – was about outsiders of some form or another, people who didn’t fit wherever they were, or wherever they were from. But when you see the protagonist of any good story, you don’t think of them as just someone else. You see a piece of your soul in theirs and see yourselves in their skin.

While my New Zealand stories were all about outsiders, they were in some ways even more about the Māori idea of kotahitanga – oneness. The characters are part of you and you are a part of them. Contrary to what I grew up believing, there is no us and them. There is only us. It took a long journey to New Zealand to make me understand that, but I think kotahitanga must have been what Senator Fulbright was aiming for from the start. Though I could only stay seven years in Aotearoa, it will stay in me forever.