Matt Hanson from Sandy, Utah is the inaugural recipient of the Fulbright-ANZA US Graduate Award, offered in partnership with New York-based charitable organisation the American New Zealand Association. Matt has been based at the University of Canterbury since February, where he is completing a Master of Science degree in Geology, specialising in spatial gas fluxes of geothermal systems. 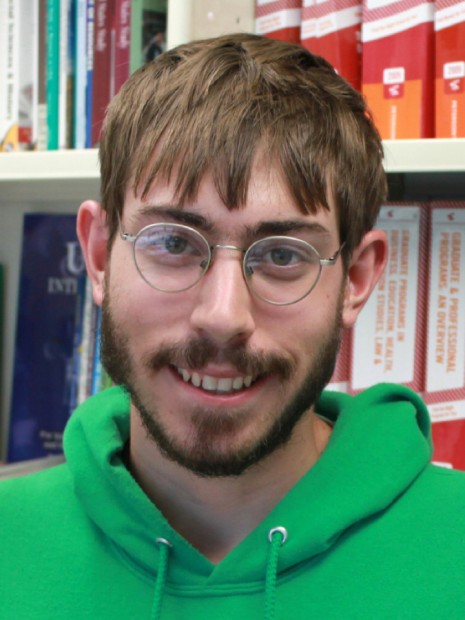 My Fulbright experience started with all the subtlety of the Fourth of July (in the States of course). Jetlagged and sick from the lack of sleep, I was met at the airport by a laughing Fulbright alumnus, Tim. He wasted no time in explaining everything he could about Christchurch, while I reeled in terror from riding on the left side of a car. The next thing I knew we were out on the Lyttelton Harbour, boating out to Quail Island. I ended the day sitting on the beach trying to find north and explain the sudden change from sub-zero temperatures to swimsuit weather. After a while I gave up, and simply enjoyed the sun and the sound of kids playing in the water.

I highlight my first interaction with Kiwi culture because it is not particularly atypical; it exemplifies a couple of the central themes of my time here – confusion, education, joy, and wonderful people ready to share their knowledge. Almost every experience has at first baffled me, but then due to the kindness of some stranger, turned out beautifully.

To back up a bit, before Fulbright I had never left the States, so the decision to drop everything and move alone to study volcanic systems half way around the world was terrifying to say the least. All I can say now is: what a country to study these systems in! The North Island is riddled with volcanoes from Mt Ruapehu in the south to White Island in the north. My project focuses on the flux of several common gases (H2S, CH4, and CO2) from a developed geothermal system (Ngatamariki) and an active marine volcano (White Island). These gases play an intrinsic role in global climate change. Despite this, the contribution from volcanic systems is not well constrained. With deeper understanding of these gases we may be able to better predict the future consequences of climate change. In addition, we have found a novel way to identify hidden geothermal systems, which could help reduce the need for electricity production using fossil fuels. 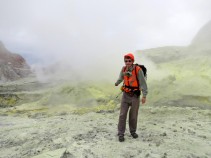 One of the perks (as well as one of the hazards) of studying volcanic systems is that you get to explore them, my most memorable experience being a trip to White Island. Located 40km off the coast of Whakatane in the Bay of Plenty, White Island is a remote landscape of steam and sulfur with no permanent life on the crater floor. The central crater is usually veiled in steam, but occasionally the lava dome peaks out like a little imp from a pit. I’ve never before seen the earth so alive; the crater is literally bubbling with energy. It’s terrifying and wonderful at the same time; just visiting this place validates my passion for geology.

Not all of my time is taken up by fieldwork, and when I’m not working on my project I help demonstrate labs and take field trips for the University of Canterbury. New Zealand geology is distinct from much of North American geology (it is younger, smaller, and much more of the rock record was deposited under the ocean). On a recent trip to Oamaru I was struck by how many preconceived notions I had about geology. Every outcrop required detailed inspection and thought, as it was unlike anything I’d seen before. It was wonderful to explore these new concepts, but even more fun to help pass them on to the third year students who were battling this confusion for the first time. I very much look forward to future trips around the island. 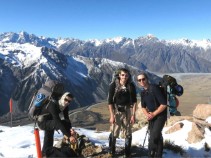 Despite its importance and prominent position in my life, geology is only part of the purpose of my exchange here. My research is allowing me to get to know New Zealand and its people far better than any visit would allow. Take for instance the mountains; before I came here I dreamed of exploring, climbing, skiing, and tramping through them. My desires have not lessened, but now I get to watch them change through the seasons and can enjoy the nooks and crannies of the country that only the locals know. I have fallen in with a group of local mountaineers. We spend some evenings with a pile of maps, guidebooks, and a computer; planning trips, waiting for the weather to clear, and sharing our favorite places in both New Zealand and North America. To me this is the greatest gift of the Fulbright – it is a chance to communicate and exchange personal meaning with people from the other side of the world. It is this experience that I would never have had without the Fulbright.

Even now when I reflect on the things I am going to take back to the States after I leave; the experience of wandering through beech forests in the rain, the unsettling feeling of being entirely out of place and lost, friends from all corners of the country, an unrequited love for both savory pies and feijoas, and the realization that the world truly is enormous; I can begin to see the impact that this time will have on my outlook at life. I’m truly grateful to the Fulbright for the chance to live and study in New Zealand. I am sure these experiences will continue to shape me in ways that I’m only starting to perceive.