Grantee Voice: Sam Corbett-Davies – Memorable first year of a PhD in the US

Sam Corbett-Davies from Napier was one of 16 recipients of 2013 Fulbright Science and Innovation Graduate Awards to study or research in the US. Now a year into his PhD in Computer Science at Stanford University, Sam is researching the development of vision systems for personal robots. As part of his research, he’ll endeavour to teach robots about the millions of objects used by humans and how they are used, by making them watch YouTube videos such as cooking demonstrations repeatedly.

I have almost finished the first year of my PhD at Stanford University, where I am lucky enough to be studying with my girlfriend and fellow Fulbright grantee Sarah Poole. That the year was over only properly hit us last month, as we watched some of our new friends graduate from one-year programmes and leave us on their next adventure! In some ways it feels like we’ve only just arrived; the first year of the PhD programme is mostly about finding your feet, we have four or five years of solid research ahead of us. On the other hand, I’ve experienced so much already: two Fulbright-sponsored conferences in the American South, the despair of watching Team New Zealand’s loss first-hand, my first 4th of July, and numerous weekend trips to state and national parks.

Before I recount the extra-curricular activities that have made my year so memorable, let me try to explain the reason I’m at Stanford. I’m doing my PhD in a sub-field of artificial intelligence (AI) known as computer vision, which aims to build machines and computer systems that can “see”, at least in some limited sense. Computer vision is what allows Google’s self-driving cars to navigate the road, and Facebook to automatically tag your photos. The field fascinates me because it is counter-intuitively difficult; even the simplest visual tasks such as “find the milk in the fridge” are incredibly challenging for a computer.

I arrived at Stanford not really knowing who I’d end up working with, so I spent the first two quarters of this year searching for an advisor and project to build my PhD thesis around. As it turned out, my future advisor, Professor Silvio Savarese, was arriving at Stanford at the same time I was. After two quarters doing small projects for different professors, I aligned with Prof Savarese, who will likely be my advisor for my entire PhD.

Our project aims to address an important challenge in computer vision: acquiring huge amounts of labelled image data. Most vision systems “learn” to see by being provided with tens of thousands of example images, and using sophisticated statistical methods to find patterns in the images. For example, Facebook’s face recognition system was trained using 4 million images of faces belonging to 4,000 people, and required each image to be labelled with its corresponding identity. Happily for Facebook, people will tag their photos (and sign away their right to them!) for free. However, most computer vision researchers aren’t so lucky, and have to pay for thousands of man-hours of labour to produce good data sets. We’re trying to reduce this labour requirement, which is slowing down progress in solving more advanced vision tasks.

We hope to achieve this by creating a system that continuously and automatically watches videos to learn about new objects. Watching humans interact with objects in videos gives us much more information about the object than static images do. For example, a chair may not be visually similar to a stool, but once we see someone sit on each of them we can determine the objects are of a similar class. We have our eye on applications in robotics, so the first set of videos we are using involve people doing kitchen tasks. Our hope is that by watching people make meals our system will be able to learn about kitchen tools and their use, information that could one day power a robotic maid or chef. As you can imagine, there is a lot of research to be done before we come close to achieving this goal!

As amazing as Stanford is, my academic life is pretty similar to the life I left at the University of Canterbury: research is tough, classes occasionally boring, and all my friends are engineers! The highlight of the year has definitely been the cultural experience of studying in the United States. My adventure (and that of three other New Zealand Fulbrighters) began at the Fulbright Gateway Orientation in Jackson, Mississippi. It’s hard to imagine two regions of the USA more different than Jackson and San Francisco, which was part of what made the experience so memorable. With new friends from all around the world, I ate all manner of fried food, visited an historic blues bar, and observed the 50th anniversary of the March on Washington in Jackson, one of the epicentres of the civil rights movement.

I’ve been lucky to find a group of friends at Stanford who are as keen to explore the area as I am. The majority of the group is American, but it also includes people from Sweden, Mexico, Germany, France and China. With the California weather stubbornly perfect all year round, there hasn’t been a dull weekend. A particular highlight was taking part in the American tradition of Spring Break, when we travelled to Hawai‘i’s Big Island for a week of swimming, exploring and relaxing between winter and spring classes.

Sarah and I would like to thank Fulbright New Zealand and everyone else who’s helped make our first year in the US so amazing. We look forward to visiting all the Fulbright friends we’ve made this year, wherever they end up! 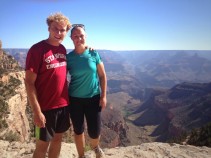 Sam Corbett-Davies and partner Sarah Poole at the Grand Canyon