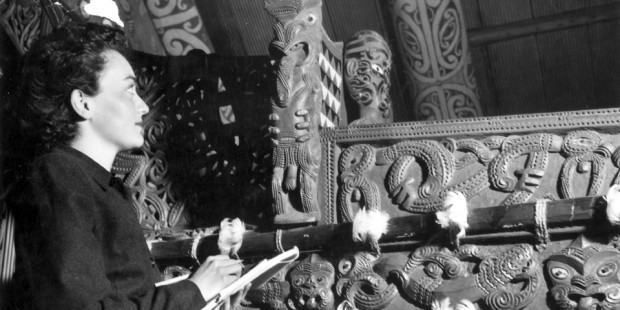 1949 Fulbright US Graduate Student Beverley Cooper, one of Fulbright New Zealand’s earliest grantees, studies a Māori waka during her exchange to New Zealand

Fulbright New Zealand this year celebrates 65 years of educational and cultural exchange between New Zealand and the United States of America. Since the founding of New Zealand’s Fulbright commission by bilateral treaty on 14 September 1948, more than 3,000 New Zealanders and Americans have benefited from exchange grants to each other’s countries, and have contributed to the success of the two partner nations and mutual understanding between them.

Planning is underway for a programme of activities and events throughout the anniversary year which will be designed to celebrate the auspicious occasion, to raise the profile of Fulbright New Zealand, and to fundraise for additional awards.

Alumni and supporters will be invited to attend expanded annual events in Washington, DC (the reception at the New Zealand Embassy in May) and Wellington (the parliamentary awards ceremony in June). Additional celebrations will be programmed around the anniversary date in September, including black tie gala dinners with art auctions in Auckland and Wellington. Alumni will be invited to contribute works for auction, and all alumni welcomed to attend these grand events and bid for artworks. Proceeds from all events will go towards fundraising efforts for future Fulbright awards.

A significant feature of the 65th anniversary year will be the launch a major fundraising drive with the target of raising NZ$1.1 million which will be endowed to the Fulbright New Zealand Trust. The interest from such an endowment would fund one additional graduate award per year in perpetuity, and as more funds are added to the trust over time, more awards can be offered. Fulbright alumni, who have themselves experienced the lifechanging benefits of an exchange abroad, are asked to donate or bequest to the endowment as a gesture of their gratitude to the Fulbright programme, allowing additional deserving candidates to follow in their footsteps in future. Fulbright New Zealand’s Board of Directors have committed to seeding the endowment with half of the required funds, meaning that NZ$550,000 will be sought from donors and fundraising events. A fundraising letter and form are included with this newsletter. Secure online donations can be made on the Fulbright New Zealand website, at www.fulbright.org.nz/donate. Please donate to help us provide more amazing opportunities.

The Fulbright New Zealand Alumni Association will hold its own events to mark the anniversary, including a nationwide Alumni Week from 8 to 15 September during which events will be held in each of six New Zealand regions. Alumni speakers and audiences will be engaged in events throughout the year including Fulbright Reflections panel discussions, Thought Leaders salons and Fulbright Lectures.

The Board and staff of Fulbright New Zealand hope that grantees, alumni, stakeholders and supporters can join us in marking this milestone, celebrating the remarkable achievements of the programme to date, and contributing to its healthy future. Volunteers are welcomed to assist with the planning and execution of anniversary events and campaigns.