Politics lecturer Jon Johansson from Victoria University of Wellington was a Fulbright Visiting Scholar in New Zealand Studies at Georgetown University in Washington, DC for the fall semester of 2009, where he taught a course on contemporary New Zealand politics while researching republican discourse in revolutionary America. The research Jon began during his Fulbright exchange recently culminated in the publication of his “Fulbright book” – US Leadership in Political Time and Space: Pathfinders, Patriots and Existential Heroes. 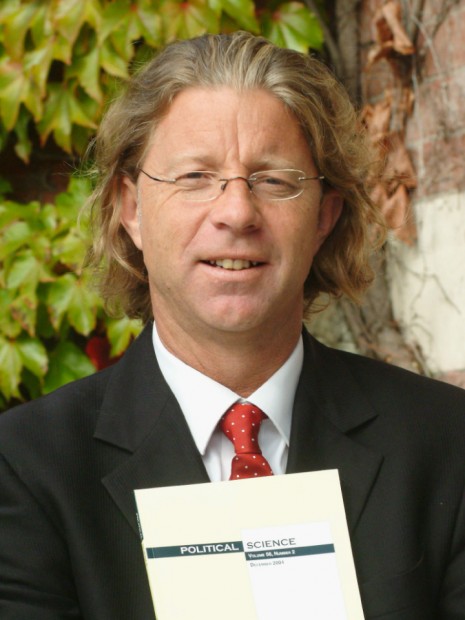 While participating in a recent Fulbright selection panel one candidate asked us what we had most gained from our respective Fulbright experiences? My answer was that my fall semester spent at Georgetown, as Fulbright’s Visiting Scholar in New Zealand Studies in 2009, allowed me to think better about my own country while also granting me the opportunity to immerse myself in American politics, to think better about theirs.

Being a Wellington-based political scientist places me at the very centre of our village’s politics and over time it’s easy to feel trapped inside the bubble. Because of this, the space that America offered, both physically and intellectually, provided the freedom in which to think about New Zealand afresh. This process happened largely unconsciously because as my plane left Auckland so too did all thoughts of New Zealand.

On our first day in Washington, as my wife and I took a taxi to Georgetown to meet my new colleagues, Rush Limbaugh – the conservative talkback host – was ranting about President Obama’s “Stalinist health care policy.” The cabbie was nodding sagely and asked us what type of health care system New Zealanders possessed. “Full Stalinist,” I replied, “but we do live longer, and for about half the cost of you guys.” He shrugged his shoulders, unpersuaded and no longer interested.

Similar forms of partisanship revealed themselves in all manner of ways during my trip – and I witnessed first hand the 75,000 strong Tea Party protest on Washington’s Mall in early fall – almost all directed at Obama and his health care policy. It seemed to me that the torturous delivery of the president’s signature reform provided a live case study of the stasis that has enveloped the American political system since its inception over two-and-a-quarter centuries ago. If Obama’s emphatic election mandate in 2008 wasn’t enough to guarantee the easy passage of health care, and if majority rule wasn’t enough, then the political system seemed far more entropic than energetic, no longer fit for 21st Century purposes.

From these experiences, and so many more, came the genesis for what I always saw as my Fulbright book. On one hand the intellectual challenge was to contemplate how narrowed a president’s scope for action was in a change-resistant political system. And if presidential leadership for whatever reason was constrained, from where else in American-styled democracy might leaders and leadership emerge? On the other hand, I also wanted my study to reflect the essential optimism I have always felt about the progressive direction of American history.

That choice led to a three year research effort and then, late last year, to the publication of US Leadership in Political Time and Space: Pathfinders, Patriots and Existential Heroes (New York: Palgrave Macmillan).

I chose 12 Americans from across history – pamphleteer Thomas Paine, General Henry Knox and Captain Meriwether Lewis from the revolutionary generation(s); Generals Robert E. Lee, Ulysses S. Grant and William T. Sherman from the Civil War era; civil rights icons Jackie Robinson and Rosa Parks; Senator Wayne Morse and Daniel Ellsberg in relation to the Vietnam War and Congresswomen Barbara Lee in relation to the War on Terror, and Marjorie Margolies, who gave President Bill Clinton his deciding vote for the 1993 Economic Plan – to showcase citizen ‘office-holders’, individuals who had shown leadership in situational contexts where respective presidents did not or could not do so on their own.

The Fulbright award and a subsequent research visit to the United States helped make this research project the most enjoyable I’ve undertaken. I drove across America twice, once from east to west across the southern arc after my stint at Georgetown finished. Then, in 2012, I drove west to east, replicating the explorers, Lewis and Clark’s return journey from Astoria, at the mouth of the Columbia River, to St. Louis, before then winding my way to Maine and more research into the revolutionary era General Henry Knox.

I dedicated US Leadership in Political Time and Space to Senator Fulbright’s driving ideals as well as to those people who devote their lives to make his ideals happen for others who have benefitted so much from the generosity of Fulbright. While in one sense the book completes for me a process that began in 2009 in another sense it signifies only the end of one phase in my life as a Fulbrighter. I’m already looking forward to the next.