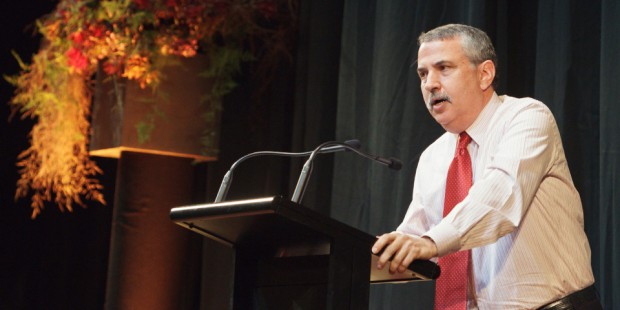 Thomas Friedman gave the closing keynote address for the New Zealand International Arts Festival’s Writers and Readers Week at the Wellington Town Hall on 14 March, speaking on the theme of his latest book That Used to be Us: How America Fell Behind in the World It Invented and How We Can Come Back. An audience of around 1,300 included past and present New Zealand prime ministers, cabinet ministers and ambassadors. 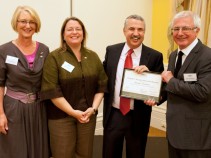 A cocktail reception was held immediately following his Town Hall Talk to formally welcome and recognise Friedman as a John F. Kennedy Memorial Fellow, at which Hon Tim Groser, the New Zealand government’s Minister of both Trade and Climate Change Issues (two topics regularly discussed in Friedman’s New York Times column), and Marie Damour, Deputy Chief of Mission at the US Embassy, spoke on behalf of their respective governments.

Friedman’s other activities in Wellington included a face-to-face meeting with Minister Groser and a breakfast roundtable meeting hosted by the New Zealand Climate Change Research Institute for 20 different government and non-government representatives.

In Auckland, a dinner was held at Fulbright New Zealand Board Treasurer Mark Fitz-Gerald’s residence, attended by Deputy Prime Minister Bill English along with a small number of influential New Zealanders. Friedman spoke again on the decline of America at a free public lecture at AUT University, with over 300 people in attendance.

Thomas Friedman conducted a number of high profile media engagements while in New Zealand, including in-depth interviews with The Dominion Post newspaper and for a new TV3 current affairs show. He wrote about New Zealand politics in a New York Times column filed from Christchurch, lamenting the destructive polarity in modern American politics while noting that “you could almost fit [New Zealand’s] entire political spectrum – from conservatives to liberals – inside the US Democratic Party.”

Friedman also holidayed for ten days with his wife, Ann, and hopes to make a return visit in future. “The two audiences I spoke to in Wellington and Auckland were totally engaged and so appreciative. I could not have asked for more,” he says. “But everywhere we travelled in New Zealand we found warm welcomes and curious minds. And the golf was to die for!”