The following alumni reminiscences have been submitted as part of our 65th anniversary activities. All alumni are invited to submit an 800-1000 word contribution about your Fulbright exchange and its effects on your life, by email to andy@fulbright.org.nz or post to PO Box 3465, Wellington 6140, New Zealand. Please also send a portrait photograph and one or more pictures of you on your exchange. 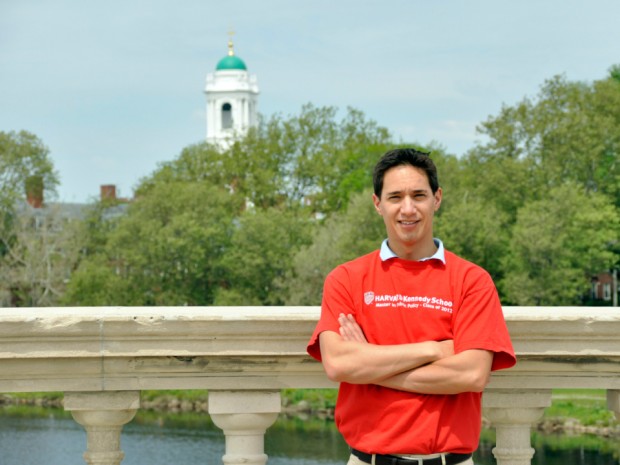 Fulbright alumnus Dan Bidois during his exchange to Harvard University

Dan Bidois received the inaugural Fulbright-Ngā Pae o te Māramatanga Graduate Award in 2010, to complete a Master in Public Policy degree specialising in economics and finance at Harvard University’s John F. Kennedy School of Government. He is now an economist for the Organisation for Economic Co-operation and Development (OECD) based in Paris, France. For our 65th anniversary, Dan recalls his Fulbright exchange experience.

The cultural immersion during my Fulbright experience at Harvard University was truly phenomenal. My Fulbright orientation seminar in Miami, Florida brought together Fulbright grantees from around the world and set the standard for what was to come.

Once I arrived at Harvard, I became completely immersed in other cultures as I was thrust into a school with students from over 200 countries around the world. On a daily basis I met people from countries I have never visited, like Uzbekistan, the Maldives and Bhutan, and I engaged in debates and dialogue with these students on topics ranging from the European and Global Financial Crisis, Venezuelan politics, the reunification of North and South Korea, social challenges in Mali and of course American political and economic issues.

The Fulbright experience changed my life in two distinct ways. Firstly, it gave me an immense appreciation and understanding of other cultures. For two years I listened and contributed to discussions with people from vastly difference backgrounds to my own. Not only did I gain a deep knowledge of, and appreciation for, American culture, but I also gained in the process a deep tolerance towards other cultures and gained friends from every corner around the globe. This for me speaks to the heart of the Fulbright experience; to forge a greater cultural understanding of the world so that together we can improve it.

Secondly, it provided me with a call to public service. The doors and opportunities that the Fulbright programme opens far outweigh the immediate financial assistance provided by the programme. Along with these privileges comes a great responsibility to serve and give back to society, no matter what your profession or chosen field of study.

Regardless of your chosen field, if you want to serve New Zealand in the future then I would highly recommend the Fulbright programme. The Fulbright programme gave me a strong sense of cross-cultural understanding, networks and relationships with future leaders from around the globe and a strong global outlook and sense of self.

New Zealand needs a greater number of leaders who have this global skill set if it is to succeed and prosper in a global environment. New Zealand needs global leaders to help address the collective challenges that we face as a nation. Do not waste time. Apply your skills and talents now and apply for the Fulbright programme. It will change your life.

American Fulbright alumnus Bill Tramposch has been the recipient of two Fulbright awards to New Zealand, and subsequently lived here twice. Bill is now Executive Director of the Nantucket Historical Association, but still visits New Zealand regularly (he was at the Butler Point Whaling Museum in Mangowhai in January, researching Nantucket whalers’ historical links to the Northland region). Having been a visiting speaker for Fulbright New Zealand’s 40th anniversary in 1988, Bill contributes a written reminiscence in this, our 65th anniversary year.

In 1986, I was privileged to receive a six-month Fulbright scholar award to Aotearoa New Zealand in the field of museum education. Being then in my seventh year as a department head at the Colonial Williamsburg Foundation, this remarkable opportunity came at the perfect time. Two years later, I was invited back to Wellington to help contribute to the 40th anniversary of Fulbright New Zealand.

Between these trips, I had the unforgettable opportunity to meet Senator Fulbright at a conference at Georgetown University. Like a rock band groupie, I thanked the Senator for having created such an option. Smiling, he asked, “Where did you go?” “New Zealand”, I replied. His response: “It is interesting to find places in the world every bit as beautiful as the United States, isn’t it?” Then, his brow wrinkled a bit and he asked with a haka-like challenge: “Now, what do you intend to do about it?” Since that day, I have been pleasantly haunted by this challenge.

The Fulbright experiences changed not just my life but the lives of every member of our family. Subsequent to the awards, we moved to New Zealand twice, first to become a department head on the Museum of New Zealand Te Papa Tongarewa project, now commonly known as Te Papa. Our second move was made so I could assume the role of Chief Executive of the New Zealand Historic Places Trust, Aotearoa’s equivalent to our National Trust for Historic Preservation. My wife, Peggy, in fact, worked for many years overseeing the programs of Fulbright New Zealand. How symmetrical! Happily, all members of the Tramposch family are dual citizens; and, happily, we love landing on the tarmacs of the US and New Zealand.

More importantly, though, I hope that the exchanges have had some small influence on extending the aspirations of Senator Fulbright through building on international understanding. I learned more from these experiences than I possibly could have contributed. Mostly I learned that it is best to enter a Fulbright experience with this mindset, for too many Americans travel abroad armed with what they sense are the right answers for questions emerging within other cultures. Just the opposite is true. Listening and learning is at the heart of the Fulbright experience. I recommend it highly.