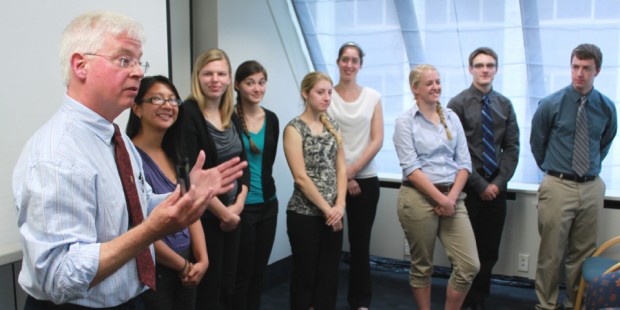 Fulbright alumnus Michael Elmes gives a seminar at the Fulbright New Zealand in office in February, along with a colleague and students from Worcester Polytechnic Institute in Massachusetts

Fulbright New Zealand has implemented a successful monthly seminar series at its office in Wellington, giving grantees and alumni the opportunity to share their Fulbright experience and research with a network of alumni, field-specific contacts and interested public. Three seminars have been held so far in 2013, with more scheduled for the last Friday of each month throughout the year.

In February, Fulbright alumnus Michael Elmes from Worcester Polytechnic Institute (WPI) in Worcester, Massachusetts gave a seminar outlining how his time spent as a 2005 Fulbright US Senior Scholar at Victoria University of Wellington inspired him to propose that WPI set up a new international project centre in Wellington as part of its global perspective programme for undergraduate study abroad.

Accompanying Michael on this year’s return visit to Wellington, and speaking alongside him at the seminar, were the project’s co-leader, Ingrid Shockey, and members of the first WPI student cohort to participate in hands-on project work with New Zealand government organizations and NGOs related to science, technology and society. Two groups of students presented the results of research they had conducted for the Zealandia wildlife sanctuary and regional economic development agency Grow Wellington. 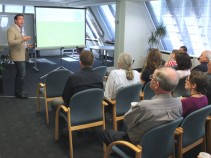 In March, recently returned Fulbright-Harkness New Zealand Fellow Peter Griffin from the Science Media Centre reported on his exhaustive two month research trip across the US, during which he visited centres of excellence in public interest journalism including the Center for Public Integrity in Washington, DC, Propublica in New York and the Center for Health Reporting in Los Angeles.

Peter reported on current and future trends in the US media and gave examples of how American models for the funding and delivery of news could be applied in New Zealand. A video of his talk is available to watch online at www.youtube.com/watch?v=XfrP-6wTqBU

In April, current Fulbright US Scholar Kathy Fox from the University of Vermont gave a seminar on her research into the restorative re-entry of criminal offenders to the community, comparing practices in New Zealand with those in the US, and in particular her home state of Vermont.