Andrew Fladeboe from Providence, Rhode Island is one of 11 American students who are studying or researching in New Zealand this year as recipients of Fulbright US graduate awards. He is photographing working dogs and their relationships with humans for a Bachelor of Fine Arts degree with Honours from the University of Canterbury. Since his arrival in February, Andrew’s project has taken him on sheep and cattle musters, dog trials, search and rescue training exercises and pig hunting expeditions around the South Island. 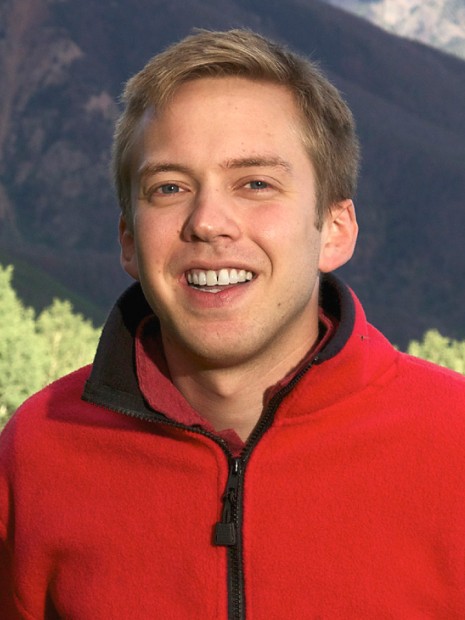 My Fulbright experience began in Cromwell, the furthest point from the sea in New Zealand. I spent 10 days working on a merino sheep station familiarizing myself with their practices and how they use their dogs to guide the sheep. They really put me to work, and while I was still getting over jet lag I was already pulling out Scottish thistle and learning just how long a day is for the average Kiwi farmer. Despite the hard work, I learned to love the long days in the fresh air and see just how instrumental a team of dogs is to practically any sheep farm.

After this “farm boot camp”, I bought a car and have been moving along to different locations trying to do as much photographing as I can before winter. My first stops were a few stations in the Hanmer Springs area. I took part in a muster that moved 3,000 ewes over a mountain and down a valley through a dense fog. Using whistled commands, the shepherd was able to situate the dogs to gather the sheep from over 100 yards away and move them along over the rough terrain. It was incredible seeing these dogs work tirelessly for their masters with an intelligence that shows the ability to think ahead and solve problems.

I often get asked why I would travel to the other side of the world to photograph dogs working on farms. I think the answer lies in the fact that working dogs serve a distinctive and crucial role economically, historically, and culturally in New Zealand. The working dogs in New Zealand were vital to the development of the country. New Zealand achieved its early wealth through the sheep industry which dominated the economy from 1856 to the 1980s. With the landscape of New Zealand offering vast expanses of territory and steep terrain, it would be impossible to farm sheep without the help of dogs. 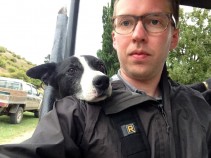 The traditional border collie and the huntaway are the two main types of sheep dogs here. The huntaway is a much bigger dog with a loud bark used to drive sheep up hills or get them moving in tight enclosures. They are unique to New Zealand and I’m already thinking of ways I could bring one back to the States with me. When I do my traditional portraits of the dogs, huntaways are often hams for the camera and show off. They’re much easier to photograph than the shy and nervous collies.

An interview with me was published in the Otago Daily Times and I was subsequently invited to LANDSAR Search and Rescue dog training at the famous Mesopotamia Station. I spent a weekend with ten trainers and their dogs observing tracking exercises and attending lectures in the shearers’ hut which we all slept in. It was an enlightening experience to see how these well-trained dogs can track down scents which are hours old, and save lives. It has shifted my focus to all types of working dogs, rather than just the traditional farm ones.

I made my way to Omarama to visit a sheep dog trial legend who has won multiple New Zealand championships. I ended up staying there for a week and met an up-and-coming rodeo star and photographed her dog at the clay cliffs used for shooting modern Westerns. I’ve attended police dog training in Invercargill and now have friends, both human and canine, in the police force.

Perhaps the most interesting experience was going pig hunting by moonlight in Fiordland. Waking up at 3:00am to go hiking through dense bush for 10km with a pack of dogs is something I will never forget, as well as falling into the river ten minutes into the hunt. Most recently, I spent two weeks at a sheep and beef farm on Slope Point, the southern-most point of the South Island. It was truly special being able to look out across the endless ocean to the South while bouncing along in a little 4×4 with three dogs guiding stubborn bulls over rolling fields of lush grass.

While I have not done a lot of trekking or done many of the tourist sites, travelling the country this way has been a unique opportunity to explore a side of New Zealand that most people don’t get to see. It hasn’t been easy. Travelling alone and constantly moving from place to place is tiring. Sometimes I don’t know where I will be a week ahead, but it’s all part of the adventure. I have met so many wonderful people travelling this way and the generosity of the dog-loving people who have opened their homes to me has been incredible. I have already made life-long friends and photographed the most amazing dogs I have ever met. None of this would have been possible without the support of the Fulbright programme. 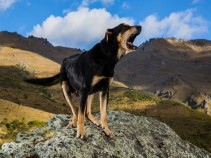 Andrew’s portrait of Ned the huntaway from Hiburn farm, Cromwell

To see more of Andrew’s photographs of New Zealand working dogs, and read regular updates about his exchange experience, visit his blog at www.theshepherdsrealm.com