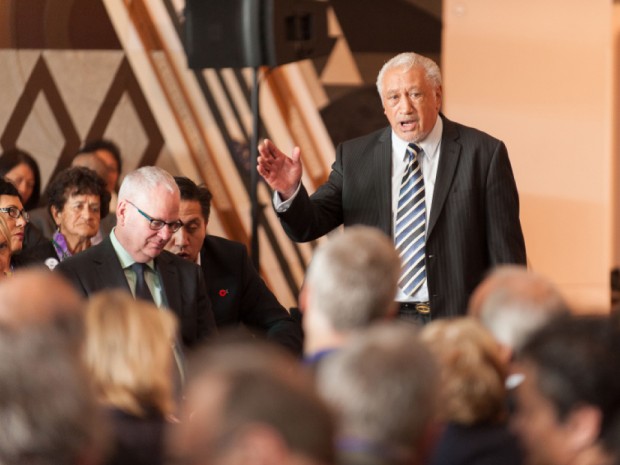 Sir Toby Curtis at the recent International Summit on the Teaching Profession in Wellington (photo: US Embassy New Zealand)

Fulbright alumnus Toby Curtis from Rotorua was appointed as a Knight Companion of the New Zealand Order of Merit in this year’s New Year Honours, for services to Māori education. He was formally invested as a knight by the Governor-General in March, joining seven other Fulbright alumni knights and five alumni dames on the New Zealand Order of Merit. 25 years on from his exchange to the US on a Fulbright New Zealand Educational Development Grant, Sir Toby reflects on his exchange experiences and a distinguished career in education.

At the time of applying for your Fulbright award you were principal of a bilingual high school, Hato Petera College. What did you learn about bilingual education on your exchange to the US?

The schools that were engaged in bilingual education tended to reinforce the work that we were undertaking at Hato Petera. There was a noticeable level of commitment and excitement among the staff and students involved in the programme. Whilst visiting a Hispanic school in particular, the principal was so immersed with her staff and students that her time with me was limited. However, due to the wairua dimension permeating throughout the school, I felt relaxed and quite at home.

The First Nation’s School in Philadelphia, Mississippi, was rather different. The pupils spoke both their mother tongue and English with ease. The language spoken by the children between class sessions was their native language. The teachers believed that this was important to ensure moral strength and pride in their culture. This enabled them to confidently take their place in the world.

You made the point of interacting with a wide range of American people, including Native Americans, African Americans, Hispanics and even Amish. Why was it important for you to do so, and what were the most interesting things you took away from these diverse interactions?

I considered this a prominent aspect of the visit. At that time, gangs and young volatile Māori activists were making their presence known in no uncertain terms at the Waitangi celebrations and elsewhere. This followed on the heels of the Māori land march in the early seventies. I wanted to know how the Native Americans, Blacks, Hispanics and Amish people were treated by the American government and people in general. I pondered whether they were being heard by politicians and if they were appropriately catered for in regard to their natural resources and cultural needs.

I also wanted to assess their natural and spontaneous ability to sing. I was not disappointed! The Hispanics, Blacks and Amish groups produced incredible cadences of harmony. This still resonates with sweetness today, whenever it is recalled by my mind’s ear. Those groups really knew how to sing, and indicated their unified strength. The Von Trapp family had impressed upon me that the family who sings together, stays together. Yesterday, I visited several marae in my home area to observe them preparing for the regional kapa haka competitions. The energy and commitment that was exhibited could be channelled into such areas as increasing NCEA success rates and decreasing crime statistics within the tribal area.

Māori language education has become firmly established in New Zealand over the course of your career, with kōhanga reo, kura kaupapa and wānanga thriving. What do you think are the next challenges in Māori education?

If the country is serious about eliminating intergenerational failure educationally among Māori youth, the country can do one of two things: 1) Increase the number of kōhanga reo, kura-ā-iwi, kura kaupapa and wānanga institutions around the country, so that all Māori pupils be given the opportunity to be taught in their mother tongue; or 2) Make each school accountable to ensure a higher level of success, not just with Māori, but all children. The Minister of Education has already moved in this direction by issuing a directive for all schools to achieve an 85% success rate or better.

The outcomes at too many schools are woeful. The Partnership Schools that were established last year were based on a stated output to be achieved. This is necessary in order for government funding to continue the following year.

You were involved in the recent International Summit on the Teaching Profession in Wellington. How important is it, in this day and age, for Māori to embrace and share knowledge with the global community?

It is of utmost importance that Māori not only share knowledge with the global community but also explore the opportunities to become firmly engaged in the economic advancement of iwi products and natural resources such as geothermal development, forestry, oil and mineral exploration, horticultural and agricultural production. Currently, iwi are the major shareholders in the fishing industry. Plans are underway for Māori to be the major stakeholder in the forestry industry over the next five to ten years.

You mentioned after your investiture that the next generation will look up to this great honour. Who were some of the great figures in Māoridom that you looked up to during your own career?

Two outstanding figures were Sir Apirana Ngata and Sir Peter Buck. They paved the way for the survival of the Māori people and its culture. Today the concern is not with biological survival, but cultural survival. What kind of Māori will we be? The use of the Māori tongue must be a prominent feature for all people and cultural strategies. Other major influences were John Rangihau, Hon. Matiu Rata, Dame Whina Cooper, Rt Rev. Bishop Manu Bennett and Major Te Reiwhati Vercoe. They all impressed upon me the attributes of modesty, care for others, and acknowledgment of their efforts. When deemed necessary, one must challenge in a respectful, assertive manner.

And what wisdom would you impart upon emerging young leaders?

Whatever your career pathway, do it to the best of your ability. If you aim for the furthest planet, you may well end up amongst the stars. For young Māori leaders, to be fully effective and acceptable to their people, te reo will need to be their foremost companion.