James Muirhead from Auckland received a 2012 Fulbright-Ministry of Science and Innovation Graduate Award to complete a PhD in geology, specialising in interactions between tectonic and magmatic processes in the East African Rift, at the University of Idaho in Moscow. James was the first of this year’s Fulbright New Zealand graduate students to leave New Zealand, departing in May for a summer field trip to Tanzania before settling in properly to his PhD course in Idaho. 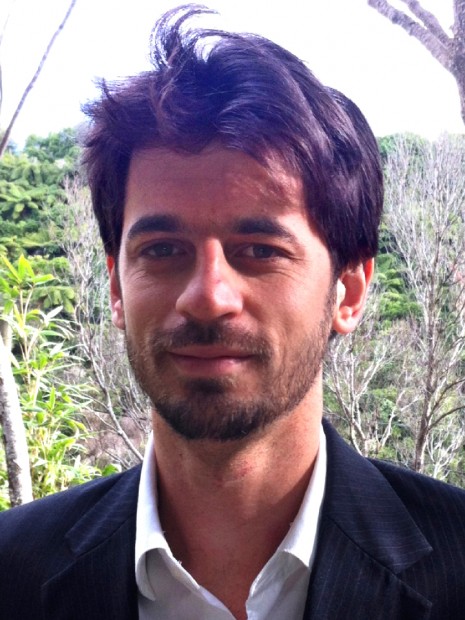 I recall sitting in class as a kid, staring out the window at the volcanic outline looming over Auckland’s Waitemata harbour. Although Rangitoto volcano has defined the city’s skyline since before Europeans arrived, to me it has also been a constant reminder of New Zealand’s vulnerability to natural disasters. Back then I hoped someone had the volcanic situation under control. Nowadays, it is my intention to be a part of this initiative, at the forefront of hazards research. So in May 2012, with the support of Fulbright New Zealand, I boarded a plane to the United States to begin my PhD research in geology at the University of Idaho.

I admit I was a bit apprehensive about my arrival to the “Potato State”. However, the lively town of Moscow (yes, Moscow, USA) quickly won me over with its down to earth lifestyle and quirky mix of espresso-drinking, gun-slinging farmers and scholars. Moscow sits right on the border of Washington and Idaho, dually flanked by the University of Idaho and Washington State University. It is a vibrant academic community nestled in the sun-drenched wheat fields of easy rolling hill country. Drive a few hours south and you reach some of the deepest canyons on Earth, carved by ancient mega-floods, before heading into the spectacular mountain ranges of central Idaho, with heights in excess of even New Zealand’s Southern Alps. 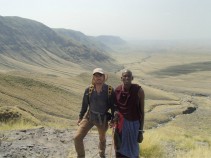 Upon arrival in Idaho, I had very little time to become acquainted with these surroundings. Within just a week I was again flying halfway around the world to Tanzania in Africa. My first field season there involved an investigation of faults and volcanic products at the southern tip of the East African Rift, where the continent pulls itself apart at a rate of 7mm per year. My doctoral project examines the timing and nature of seismic and volcanic events in this continental rift. Working amongst giraffe, zebra and (unnervingly) cheetah, we stayed with the local Massai tribe, spending humid evenings in thatched huts, swatting off mosquitoes and exchanging stories. While I described how the All Blacks valiantly fought off the French in the rugby World Cup final, my Tanzanian colleague spoke of how his grandfather once staved off a rogue lion all night to save his family’s farm. 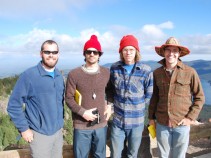 James Muirhead with classmates at the Newberry volcanic field in Oregon

Since returning back to the States, I have continued my investigation of volcano-tectonic processes in Tanzania utilizing satellite data, while attending lectures and visiting local volcanoes in the Cascades Range. A highlight so far has been a field trip with 42 graduate and undergraduate students to Crater Lake and Newberry volcanoes in Oregon, where we camped amongst the products of some of the largest volcanic eruptions in recent times. An unexpected bonus of working at the University of Idaho is that my fellow PhD students research the tectonics of Mars and one of Saturn’s moons, Enceladus. Sharing an office with these “extraterrestrial” researchers, who require uniquely innovative approaches in their studies, provides a creative influence to push beyond conventional boundaries and consider the implications of my work not only for issues on Earth, but to other planetary bodies in our solar system.

Looking forward, I hope to incorporate our findings into an improved model of the time-dependent behaviour of earthquakes and volcanoes in Tanzania. We will head to Kenya during next year’s field season to test these ideas in other parts of the rift. With such a large scientific community in the United States, I also intend to make the most of opportunities to share ideas widely by presenting preliminary findings this October at an East African Rift workshop in New Jersey. This will be followed by the world’s largest meeting of earth scientists (Fall AGU), which is attended by about 20,000 people in San Francisco each year.

When originally applying for a Fulbright New Zealand scholarship over a year ago, I never imagined that the proposal would allow me to work in and experience such diverse places and cultures. Although my ultimate goal is to benefit hazard preparedness in New Zealand, the opportunity to interact with and contribute to communities in Africa and the US, and to be impacted by them, has by far been the most rewarding aspect of my journey.