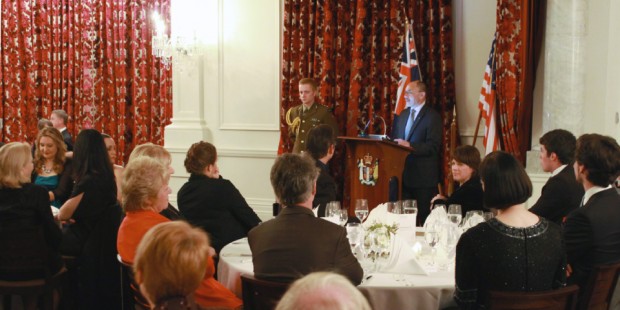 The gala dinners in Auckland and Wellington were both lively events which were attended by capacity groups of alumni, stakeholders and supporters. 90 guests attended the first gala dinner at Villa Maria Estate in Auckland on 7 September, at which speakers included Fulbright New Zealand chairperson Helen Anderson, the US Ambassador to New Zealand, Hon David Huebner, and alumni Charles Royal, Megan Couture and Natalie Coates. Also included in the programme were a creative reading by alumna Ghazaleh Golbakhsh and singing performance by alumna Frances Moore. Three artworks by alumni Paul Cullen, Richard Maloy and Raewyn Turner (in collaboration with Brian Harris) were sold by silent auction, and guests answered a fun quiz about the history of Fulbright New Zealand, its exchange programmes and alumni.

A week later 120 guests were hosted for a second gala dinner by the Governor-General of New Zealand, Lieutenant General The Right Honourable Sir Jerry Mateparae and his wife Lady Janine Mateparae, at their residence Government House in Wellington. In his welcoming speech the Governor General said “Tonight, we are celebrating a successful enterprise and successful people.” He cited a description by Fulbright alumnus historian Jock Phillips of the ‘friendly invasion’ of New Zealand by American servicemen during the Second World War – “the two societies were sufficiently similar to communicate easily, but sufficiently different to find each other intriguing” – and congratulated Fulbright New Zealand on 65 years of encouraging and facilitating education, excellence and reason.

US Ambassador David Huebner and New Zealand’s Minister of Education, Hon Hekia Parata, spoke as representatives of the two partner governments in New Zealand’s Fulbright programme. Alumni and grantees were again showcased, with speeches by current US graduate student Andrew Cole and recent New Zealand alumna Nicola Kean. Alumna Marisa Maepu read from the novel written on her exchange and alumni Susana Lei’ataua and Gareth Farr gave a musical performance. Toasts were made to the President of the United States of America and the Queen of New Zealand, and two artworks by current grantee Janna van Hasselt and alumnus Darcy Nicholas were sold by silent auction.

Dinner guests were invited to donate to the Fulbright New Zealand Trust endowment fund when booking their tickets, with donations received from generous alumni and supporters throughout the year now totalling NZ$35,000. A further NZ$18,000 was raised through our auction of artworks by alumni and other leading New Zealand artists at dinners and online in September. We thank all donors and art buyers for supporting this initiative to create an endowment which will fund additional exchange awards in perpetuity. Tax-deductible one-off donations, pledges or bequests will continue to be welcomed for the remainder of the anniversary year and beyond. For details of the various ways you can give, see www.fulbright.org.nz/donate