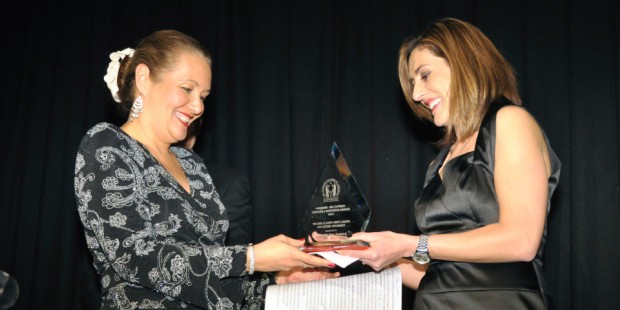 Fulbright New Zealand’s longstanding and significant contribution to strengthening bonds between the people of New Zealand and the United States of America has been recognised with the American Chamber of Commerce in New Zealand (AmCham)’s inaugural Eric & Kathy Hertz Award for Citizen Diplomacy, which was presented at the 2014 AmCham-DHL Express Success and Innovation Awards in July.

The new award was named in honour of American 2degrees chief executive Eric Hertz and his wife Kathy, who died tragically in an airplane crash last year. It recognises contributions in any field that complement the deep political and economic ties between New Zealand and the US, including education, science, research, culture, arts and sports. The award was one of seven presented by AmCham this year, with others focussed on business exports, imports and investment.

AmCham received a diverse range of entries for the new citizen diplomacy award, with other finalists including the Royal New Zealand Ballet, primary sector collaboration initiative New Zealand Bootcamp, and the New Zealand Robotics Charitable Trust, which runs the VEX Robotics Competition in New Zealand schools to inspire interest in science and technology. As winners, Fulbright New Zealand received a cash prize of $2,500 which was deposited into our endowment fund.

Fulbright New Zealand’s executive director Mele Wendt was present at the AmCham Awards black tie gala dinner at the Pullman Hotel in Auckland to receive the award, along with a number of Fulbright New Zealand board members, award sponsors and alumni. Mele noted that the award recognises the people-to-people impacts of the Fulbright programme, which lie at the heart of the programme and extend well beyond just the academic and personal impact on the individuals selected as grantees.

“Last year we celebrated the 65th anniversary of the Fulbright programme in New Zealand, in which time we have given more than 3,000 New Zealanders and Americans the chance to undertake life-changing educational and cultural exchanges to each other’s countries,” Mele said.

“There is a wonderful multiplier effect in the goodwill and understanding generated by our exchanges. Many grantees are accompanied by partners or whole families on their award. Each of those individuals touches the lives of so many people they meet during their exchange, and returns home to help spread a deeper understanding of their host country. Our alumni live the Fulbright mission of promoting mutual understanding for the rest of their lives.”