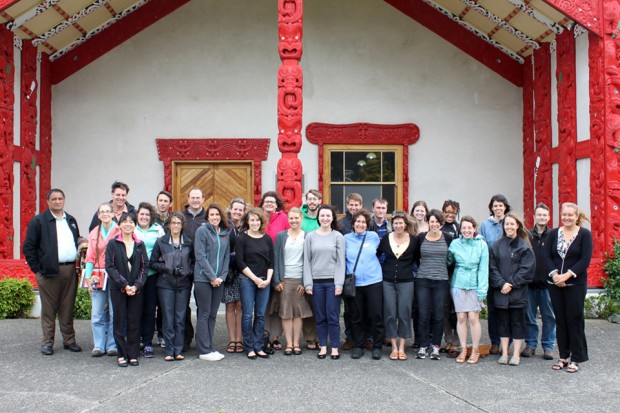 Mele Wendt, Executive Director of Fulbright New Zealand, says the organisation prides itself on providing a warm welcome to American exchange grantees. “Incoming grantees are given a comprehensive grounding in some of the important factors shaping modern New Zealand society, which will inform their months of study and research here. But of equal importance is their exposure to the genuine hospitality and manaakitanga of New Zealanders, including their hosts and speakers at various orientation activities, and our own Fulbright alumni.”

As part of the orientation programme, grantees and their families were home-hosted by local Fulbright alumni for dinner and an overnight stay, connecting them with the valuable support network that the broader Fulbright community in New Zealand will provide throughout their exchange.

Over the coming year, grantees and alumni will be involved in various activities and events to celebrate the 65th anniversary of Fulbright New Zealand, which was formed by the signing of a treaty between the governments of New Zealand and the United States of America on 14 September 1948. A major fundraising campaign is underway during Fulbright New Zealand’s anniversary year to establish an endowment fund, the interest from which will fund additional awards in perpetuity. Donations are being accepted online at www.fulbright.org.nz/donate

For promising US graduate students to undertake postgraduate study or research in any field at a New Zealand institution, for one academic year.

Alyssa Braciszewski from Huntingdon Valley, Pennsylvania will research the effects of nitrogen pollution and bleaching on sea anemones, at Victoria University of Wellington.

Anton Chiono from Berkeley, California will research the inclusion of forests in cap-and-trade climate policy, at Victoria University of Wellington.

Andrew Cole from Appleton, Wisconsin will compose music based on field recordings of natural, rural and urban areas of New Zealand, at the New Zealand School of Music, towards a PhD from the University of Missouri–Kansas City.

Camille McCallister from Washington, DC will research health communication to Māori across different socioeconomic statuses, at the University of Auckland.

Terri Motraghi from West Sunbury, Pennsylvania will research post-earthquake health and educational outcomes of young children in Christchurch, at the University of Canterbury.

Tessa Scroggin from Ashland, Oregon will complete a PhD in Māori and Indigenous Studies, specialising in the cultural concepts and strategies used to advance Māori education, at the University of Canterbury.

Jennifer Whisler from Peru, Nebraska will research the development of Greenstone digital library software, at the University of Waikato.

David Zweig from Athens, Georgia will research the effect of temperature on the efficiency of denitrification bioreactors for agricultural effluent, at the University of Waikato.

For a promising US graduate student to undertake postgraduate study or research in a field related to earthquakes and their repercussions, at a New Zealand institution for one academic year.

Matt Hanson from Sandy, Utah will complete a Master of Science degree in Geology, specialising in 3D geochemical mapping of the Rotokawa geothermal zone, at the University of Canterbury.

For US academics, artists or professionals to lecture and/or conduct research in New Zealand for three to five months.

Terrie Epstein from Hunter College will research young people’s perspectives of the Treaty of Waitangi, at Victoria University of Wellington.

Kathy Fox from the University of Vermont will research restorative re-entry of offenders to the community, at Victoria University of Wellington.

For outstanding mid-career US professionals to research and gain first-hand experience of public policy at a New Zealand government organisation for seven months.

April Ferrino from the Texas Legislative Budget Board will research regulatory support for the promotion of person-centered care in rest homes, at the Ministry of Health.

Eileen Harrity from Chicago Public Schools will research the development of educational pathways to improve youth employment prospects, at the Ministry of Education.

Mary Jo Kaplan from Kaplan Consulting will research social enterprise and innovative approaches to addressing social needs and engaging youth, at the Ministry of Social Development.