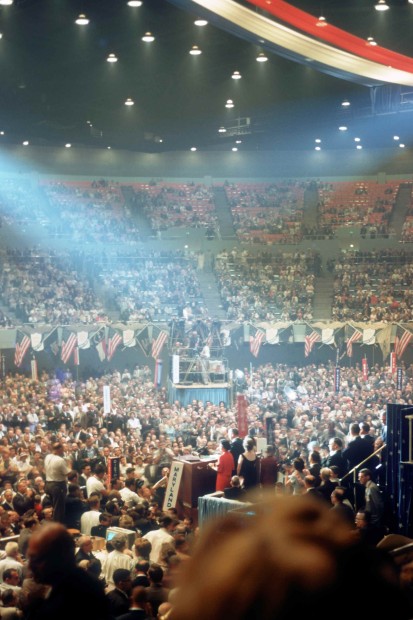 An election on the other side 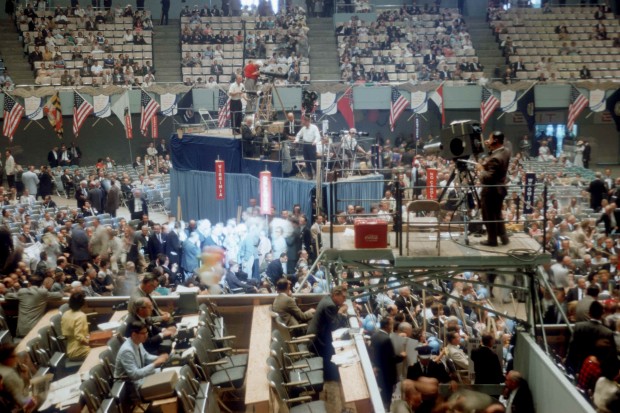 Dr Rod Bieleski was a 1960 Fulbright New Zealand Senior Scholar at the University of California, Los Angeles, during that year’s American presidential election campaign. Almost half a century later, as both the US and New Zealand headed to the polls for their 2008 elections, Rod reflected on his unique experience at the 1960 Democratic Convention where John F. Kennedy was nominated for President. How on earth did a plant physiologist, and a New Zealander at that, land up attending the Democratic Convention of 1960? Here’s how it came about, the Fulbright way.

It’s hard for someone of today’s generation to realize just how foreign a place the USA was to a New Zealander in 1960. England was still the Mother Country and all our culture came from there. It worked the same the other way – nearly all Californians confused New Zealand with Australia, most expecting us to wear grass skirts.

So the first few weeks of our visit were a huge learning experience, both ways. Strangely, our first common ground centred around lunch, where my regular sandwich lunch (eaten at my desk) was recognized as the USA brown bag lunch (to be eaten in seminars). I was promptly invited to join the Cynical Seminar, run by a small group of about 15 academic heavyweights. 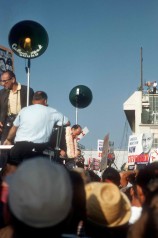 While some science came into the discussions (with me hanging on every word), USA was approaching the 1960 presidential election and I got a rapid insight into the complexity of US politics.

All were leftish Democrats, praising and condemning various aspects of politics in their country. I soon became aware that the entire spectrum of New Zealand politics fitted within the rightish and leftish Democrat’s world, which made for easier understanding on my part. When I revealed this insight, wise heads were nodded, New Zealand was praised as an enlightened and 100% Democratic place, and I became an honorary Democrat on the spot. The single biggest political issue for the Cynical Seminar that year was segregation, mostly absent in California but prevailing in all the southeastern States.

For all seminar members, the total removal of colour discrimination over the entire USA was a burning issue (I didn’t realize it at the time, but nearly all the group were Jewish, and understandably sensitive to racial discrimination). My boss, George Laties (with his wife Betsy equally involved) went beyond talking and was an active, working member of the Democratic Party.

For George and Betsy, the presidential candidate who most accepted the need to do something positive was Adlai Stevenson. He was their champion and they were prepared to work their tushes off for him. As good Fulbrighters, my wife and I hung around, trying to get a deeper insight into this aspect of American life.

I can still remember Betsy’s fury when, with her, we passed a house at the bottom of her road where there was a burning cross on the front lawn (yes, a burning cross, in LA, in 1960). To Betsy it was a total obscenity, and when she explained its background, it was to us too. And that’s why we went out to the airport to greet Adlai Stevenson when he arrived in LA for the convention. 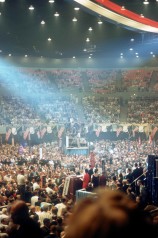 George and Betsy, as party activists, had to be there and had tickets to attend the convention. It was exciting for them, looking at and greeting a potential President who could make such a difference to their muchloved country. It was great to be there, surrounded by exuberant supporters, and to experience the roiling enthusiasm. It made, and still makes, our elections look tame by comparison. But after the first day of the Convention, everything was black for the Laties. Their champion was soundly defeated, and John F. Kennedy was to be the presidential candidate.

They saw him as one of the old establishment, not prepared to make any change. Worse, by the time they left the convention that evening, it was clear to them that the next day Lyndon Johnson would be elected as the Vice Presidential candidate, and they couldn’t stomach that. Johnson was a hard old Texas politician, right from the middle of segregation country. They would not attend the convention the next day to see that, and we were offered their tickets.

By now we were all wrapped up in the excitement of the American political process, and accepted like a shot. And that’s how we attended the convention on that historic day when LBJ was nominated as vice presidential candidate.

We experienced the parading of the state banners, the calling out of the state votes, the smoky atmosphere, and fi nally LBJ’s acceptance speech. The Laties’ upset had been our treasure – we had attended a major event in American politics. Hindsight is a wonderful thing.

Three years later JFK was assassinated. LBJ became President through the back door. The Laties were wrong – LBJ did more than any other politician before or since to attack segregation, nurturing the Civil Rights Act of 1964 which outlawed most forms of racial segregation and then in 1965 the Voting Rights Act which outlawed discrimination in voting, so allowing millions of southern blacks to vote for the fi rst time. And Val and I saw the historic event that, more than any other, started that process. Not bad for a New Zealand-born plant physiologist.