Dr Jody McBrien on what makes the women of Lira, Uganda resilient 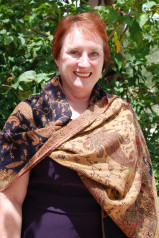 Dr Jody McBrien is the co-editor of Cold Water: Women and Girls of Lira, Uganda, in which women retell their experiences from northern Uganda during the 1987-2007 civil war and their lives afterwards.

During the war, Kony’s Lord’s Resistance Army (LRA) was destructive, disruptive and committed atrocities against women and children.  While the books covers the hopelessness women felt during the war, it also highlights their hope and resilience, and how communities were rebuilt. It shows the courage and triumph of the remarkable women of Lira.

Dr Jody McBrien will be speaking at a free Fulbright seminar on 8 October in Wellington. Click here to register.

What made you decide to visit Lira, Uganda?
Actually, my first visit was serendipitous. I had recently returned from my second trip to Africa, two weeks in Ghana visiting a refugee camp and its educational facilities for Liberian refugees when I was contacted by a Canadian researcher who had read my work and asked me to be her co-PI (primary investigator) for an educational needs-assessment in northern Uganda. I had spent five years working with resettled refugees in the US and wanted to understand the whole refugee journey. So I gladly agreed. When there, I met people who so moved me that I told them I wanted to return to work with them. That was the beginning of my 6-year journey.

How much knowledge did you have of what communities had suffered in Lira before arriving?
I had plenty of book knowledge. I was familiar with Joseph Kony and the Lord’s Resistance Army (LRA). But reading is one thing, and experiencing is another. After working with resettled refugees in the US, I wanted to also experience first-hand the kinds of tragedies that forced refugees to leave their homelands, rather than simply readings about it in academic articles.

How would you describe communities in Lira, Uganda now?
It has now been about eight years since Kony has been a threat to the northern Uganda communities. And yet, there is a great mixture of response. There are still some people who remain in the IDP (internally placed people’s) camps, because they genuinely believe that Kony is coming back. This number, however, is a small percentage. Among those who have returned, there have been major problems with “land grabs,” especially in the case of widows and orphans who do not have papers proving that certain lands belonged to them before the war. In the early years after the war, there were a number of international NGOs (non-governmental organizations) which were highly involved in post-war rehabilitation and rebuilding. Now, most have moved on to world areas in major crisis. My observation is that this has caused northern Ugandans to become ever more self-reliant. They are figuring out how to build without international support, in spite of the tremendous difficulty and enduring poverty.

You talk about ‘resilient’ women. Can you describe what resilience means to you and how these women embody it?
The resilience of the women I know in Lira is beyond anything I have ever seen in my own comfortable life. One woman, with an M.A. in social work, had a husband who left her for a younger woman. He allowed her to keep their home to raise their children. Then he decided he wanted the house, so he hired a man to kill her. She has many knife scars, but she managed to survive. A couple years ago, she received a call from a hospital. She was told that a man there gave her name as his only relative. He was dying from AIDS. Of course, it was the husband. Emma went to the hospital and stayed by his side, nursing him back to wellness. Then she took him to her house until he was able to go off on his own. That is about the most amazing forgiveness and resilience I can imagine. And other women I know there also have stories of remarkable kindness, generosity, and resilience, including those I know who struggled while their children were abducted by Kony’s army.

Did you interview mothers who had children recruited by LRA and who had children killed? How do those women tackle their grief and the aftermath of that?
Yes, I know women who had children abducted by Kony’s LRA. I also know women whose children were killed, though their stories are not in our book. Three women narrators tell stories about family members abducted, or about their escape from the LRA. Grace Acan was one of the Aboke girls. This was a group of 139 girls who were taken from St. Mary’s College for Girls in Aboke. 109 were released, but the LRA kept 30. Grace was in the bush for 8 years and had two children by commanders. Her son died in the bush. She escaped with her baby daughter; her story of escape is in our book. Her mother also has a chapter about how she worked to get her daughter back. And another woman speaks of girls who were like her own daughters, who were taken by Kony.

What gives these women strength, comfort and the will to go on?
I have to say that these women are greatly supported by their religious faith. As someone who is not religious, I find this a rather remarkable concept. But their faith, their love of their communities, and their networking with one another have been the keys to their resilience.

How do you maintain your own sense of inner strength, safety and optimism when in Lira seeing and hearing about difficult experiences?
Good question! I know my dean once told me that I needed to give myself breaks when writing the book, as he worried about the effect the tragedies might have on my capacity to continue with my normal work.

To start with the easy part, I never feel unsafe in Lira. I guess that is because, over the years, I have amassed such an amazing group of friends. They never let me walk alone, especially at night. They take amazing care of me!

Inner strength and optimism are more of an ebb and flow. Though I could stay with friends, I always choose a hotel, because I definitely need down time by evening and an opportunity to rejuvenate before the next day. Why is that? I am an American. Ugandans see Americans as being able to take care of their financial needs. I get that. My house has so many more luxuries than theirs. I make so much more money. It is hard for them to imagine that I need to pay so much on a monthly basis for food, electricity, mortgage, and on and on. And so, every day that I am in Lira, I have so many people asking me for school fees, for computers, tuition, money for a latrine, school books, donations for organizations, and more. This is what weakens my inner strength. I hate having to say that I cannot provide these things. It makes me very sad. I guess I counter that with optimism when I see what my friends and their community members have accomplished from year to year – adding to their schools, building a community mall, increasing their CBO (community-based organisation) offerings, etc.