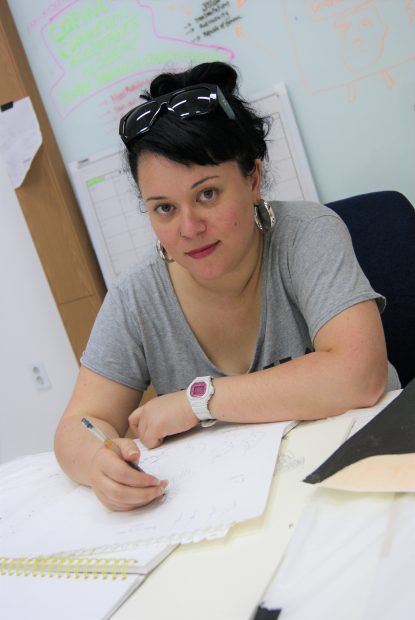 WELLINGTON, NEW ZEALAND, 14 June, 2018 — Fulbright New Zealand and Creative New Zealand are pleased to announce this year’s recipient of the Fulbright-Creative New Zealand Pacific Writer’s Residency is Jessica Hansell, a.k.a. Coco Solid. As part of the residency, Jessica will be producing a body of writing at the University of Hawai’i this August. She is a Māori / German / Samoan musician, multidisciplinary writer and visual artist from Auckland City.

“I hope to provide a work that grounds and speaks to my creative Māori and Pasifika communities, especially those challenging the narratives we have been given throughout history and those living in urban upheaval and change,” said Jessica.

The Fulbright-Creative New Zealand Pacific Writer’s Residency is for a mid-career or senior New Zealand writer of Pacific heritage to carry out work on a creative writing project exploring Pacific identity, culture or history at the University of Hawai‘i for three months. One award valued at NZ$30,000 is granted each year, towards three months of writing.

“I am looking forward to having access to the amazing Center for Pacific Island Studies resources, a true Polynesian nerd dream. I am of course stunned to be able to research and create in Hawai’i, a place I regard as the mothership of so much Pacific magic and history. I also will relish the chance to produce independently while meeting the creative community there,” said Jessica.

Jessica will be based at the Center for Pacific Islands Studies at the University of Hawai‘i at Mānoa in Honolulu from August to November 2018. Hawai‘i has been identified as a strategic location for artists and is considered the hub of Pacific writing with numerous universities, library resources, networks, writers’ forums and publishers. It is also an important link to the mainland US and has a strong indigenous culture.

“We are thrilled that such a talented and innovative Pasifika writer from Aotearoa has been awarded the residency this year. We’re sure Jessica’s creative practice will be inspired further from this wonderful opportunity and partnership between Creative New Zealand, Fulbright New Zealand and the University of Hawai’i,” said Creative New Zealand Arts Practice Director, Pasifika, Makerita Urale.

Jessica and the other 2018 Fulbright Grantees will be honoured at the annual Fulbright New Zealand Awards Ceremony at Parliament on Monday 18 June 2018, hosted by Deputy Prime Minsiter Rt. Hon Winston Peters.

In addition to this residency, Jessica is working on a number of other projects, including an animated cartoon due for network television, due to be released later this year, and she is a writer of Taika Waititi’s and Jemaine Clement’s upcoming television show ‘Wellington Paranormal,’ coming out in June. “I am multidisciplinary – I rap, produce, write prose, poetry, for screen and comics and I am happiest when I am pushing the boundaries of what is possible within a medium,” explains Jessica.

Her work and latest album is available at http://cocosolid.com. For more information about the award or for grantee contact information, please contact Fulbright New Zealand Communications Manager Rachel Tilghman on Ph. 04 494 1507.

Fulbright New Zealand was established in 1948 to promote mutual understanding through educational and cultural exchanges between New Zealand and the United States of America. The Fulbright programme offers a range of prestigious awards for New Zealand and American graduate students, academics, artists and professionals to study, research and teach in each other’s countries. More than 3,000 people have benefited from a Fulbright exchange between New Zealand and the United States to date. The programme is jointly funded by the US and New Zealand governments with additional funding from award sponsors, private philanthropists and alumni donors. More information is available here.