Connections written in the stars

Dr Rangi Matamua (Ngai Tuhoe), lecturer in Māori and Pacific Development at University of Waikato, received the 2014 Fulbright-Ngā Pae o te Māramatanga Scholar Award. He used the grant to research how astronomy is embedded within the cultural practices of indigenous peoples at the University of Minnesota in Duluth.

When Hamilton-based lecturer Dr Rangi Matamua travelled to University of Minnesota Duluth to research indigenous astronomy, he expected there might be the odd similarity between how Māori and Native American peoples see the stars. Talking with people in the United States on his exchange, he was struck by the deep connections these communities from opposite sides of the world share when it comes to the night sky.

Dr Matamua set out to tackle a project titled ‘Ngā tātai arorangi taketake, Indigenous Astronomy’. His initial project was to explore the connections between astronomy but the scope grew to become a larger study of indigenous astronomy. The original goal was to understand the place of traditional astronomy within Native American peoples and to compare this to the Māori situation. 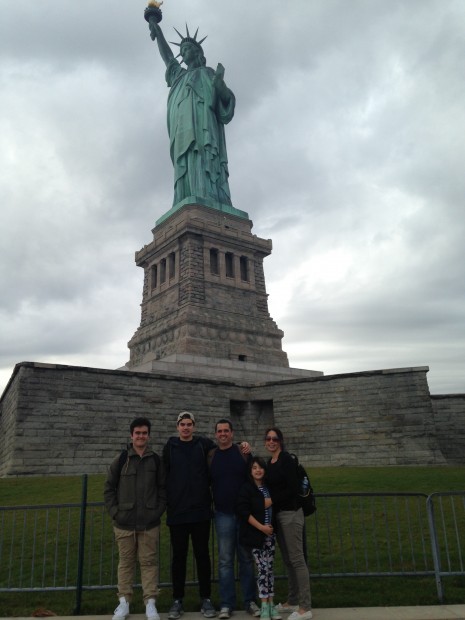 Rangi and family at the Statue of Liberty

His research resulted in the creation of a large and extensive body of work based on Māori astronomy, which contradicts the beliefs of early New Zealand ethnographers and some current
researchers who believe the record on Māori astronomy is limited at best.

“At the time I made the application for the Fulbright-Ngā Pae o te Maramatanga Award I assumed that the Māori situation would mirror that of the Native American peoples. However, what I came to realise during the course of my research, especially when I interviewed and interacted with elders and knowledge holders from the various communities, is that the record in America is extensive indeed.”

While it is possible to group Māori astronomy into one body of work because the beliefs are so similar across the many tribal groups, this is not the case in America. Due to the extensive land mass and the cultural differences between the different nations, there are many astronomical records and a host of different beliefs and practices.

“Even with the variety of peoples and beliefs there are a number of similar principles and approaches in the astronomical knowledge of the Native American people that mirror that of the Māori,” Dr Matamua says.

“Issues such as embedding astronomical knowledge and science within cultural understandings and cosmology, the importance of heliacal stars, the belief that people descend from the stars, the
infusing of astronomical knowledge within cultural practise, seasonal activities, the landscape, religious beliefs and even within the language of people were common points that link Māori astronomy to the cultures. All of these points became apparent during my research in America and gave my own research more scope and deeper meaning.”

His project focused on three issues:
1. Examining the similarities and differences in the astronomy cultures of the Māori, Hawaiian and Native American;
2. Exploring just how central the role of
astronomy was to traditional peoples; and
3. Developing pathways to revitalise the practise of traditional astronomy, making it part of the modern world in which we live.

Personally, he found spending extended periods of time with other like-minded native people who were practitioners of astronomy extremely rewarding. During one of these many and long sessions, Dr Matamua and other astronomy practitioners found an interconnectedness in their experiences and beliefs.

“That interaction developed further and now a collective of Native Astronomers from America, Hawaii and New Zealand are looking to pool resources to establish a series of planetariums that are connected on line, to be used as a sharing and teaching space for the different peoples.”

His Fulbright-Ngā Pae o te Māramatanga Scholar Award was an experience that extended to his whānau, as his wife and three children accompanied him to the United States. For the most part they adapted to their new surrounding quickly. 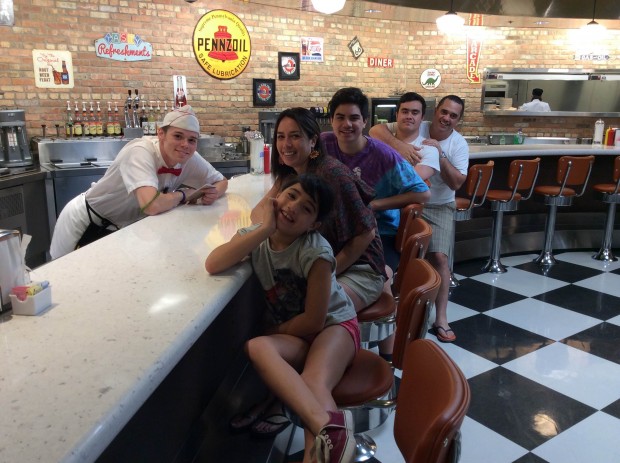 Rangi and his family at a diner in the US

“From the moment we landed in Kansas City and were met by our host family, it was evident that the experiences that awaited us would be rich and rewarding. Our first few weeks saw us travelling great distances with our host family attending their tribal powwow and interacting with tribal leaders and elders, and becoming totally immersed with the indigenous peoples of the land,” Dr Matamua says.

His children attended the local High School and Elementary School which they loved and where they forged lifelong friendships. The opportunity to experience the US education system sparked thoughts of pursuing their own higher education in America.

“We were very fortunate in our experiences, my wife and I were taken racing on the Fond du Lac reservation, and our two older boys spoke about their view of being young Māori youth and what their identity meant to them in front of the Houma Nation Community in Louisiana. My wife and I along with our 8 year old daughter gave a talk to her class at Stowe Elementary about New Zealand and also about being Māori and what that meant to each of us,” Dr Matamua says.

“These experiences along with a multitude of others gave our whānau a true appreciation of our own identity and how important identity is to us as indigenous people. Furthermore, these along with the relationships we made truly enriched our lives.”

Following his exchange, Dr Matamua published papers based on his research including ‘Te reo o ngā Whetū – the language of the stars’ presented at He Manawa Whenua Indigenous Research Conference in Hamilton. He is currently supervising seven Māori PhD students at University of Waikato.

The Fulbright-Ngā Pae o te Māramatanga Scholar Award is for a New Zealand academic, artist or professional to lecture and/or conduct research at a US institution in the field of indigenous development. One award valued at up to US$37,500 is granted each year, towards three to five months of lecturing and/or research. Applications close 1 October annually.