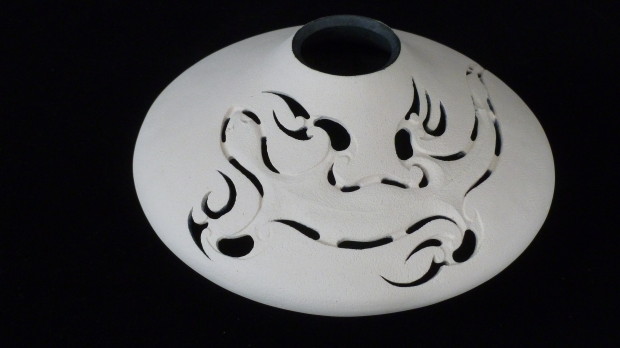 While in the U.S., Mr Nathan and Mr Riddell made contact with many contemporary and traditional native American potters, mostly in Arizona and New Mexico, to explain their kaupapa (mission). They also visited potters in California, and visited the museums and galleries of New York, Washington and San Francisco.

Since the mid 1980’s Mr Nathan has been associated with the development of the Maori ceramic movement.

He was the co-founder of Nga Kaihanga Uku a Maori clay workers’ organisation.

His involvement with clay emerged from a background of wood carving and sculpture. He carved the meeting house at Matatina Marae, Waipoua, on his tribal lands. His works in clay draw on a rich heritage of the customary art forms and on the Maori cosmological and creation narratives.

Mr Nathan participated in and promoted cultural exchange programmes with First Nations peoples from North America, the Pacific and more recently Japan.  In June 2002 he was awarded “Te Ara Whakarei”, honorary user status for the Toi Iho – Maori Made Mark.

His work is held in public and private collections worldwide, including works in the British Museum, the Museum of Scotland, the Museum fur Volkerkunder, Berlin, the Burke Museum, Seattle and Te Papa Tongarewa, Museum of New Zealand. He was represented in the “Te Waka Toi” exhibition that toured the USA in 1992 / 94.

His work was exhibited in “Fusion: Tradition & Discovery” 1999, in “Kiwa – Pacific Connections” 2003 and in “Manawa – Pacific Heartbeat” Feb 2006 at the Spirit Wrestler Gallery in Vancouver, Canada. He was also took part in the “Maori Art Meets America” exhibition and cultural events, San Francisco 2005 and “Toi Maori: Small Treasures” at the de Young Museum San Francisco 2008

New Zealand exhibitions in which Mr Nathan’s work was shown include: “Taiawhio – continuity and change” in 2002; “Nga Toko Rima: contemporary clayworks” in 2003 / 05 at Te Papa, Museum of New Zealand; “Reflection: Battle of Crete 1941” 2009 at Pataka Museum and Gallery, Porirua City.