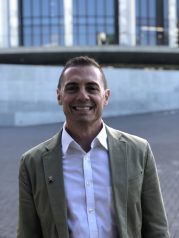 Paul Phifer has worked for the U.S. Fish and Wildlife Service (Service) since 2001.  For the past decade, he has served as the assistant regional director for Ecological Services in the Service’s Northeast Region.  In this capacity, he manages a dozen offices working on a host of species and habitat conservation areas, including endangered species, environmental contaminants, coastal issues and wetlands.  He came to the Northeast from the Pacific Northwest, where he was the Northern Spotted Owl Recovery Coordinator.

Prior to working for the Service, Paul was a diplomat the with U.S. Department of State negotiating, at the United Nations, international treaties on invasive species and movement of genetically modified organisms. After graduate school, he led field research in New England to study the effects of environmental contaminants on birds and bats for BioDiversity Research Institute.

Paul graduated from Boston College with a degree in philosophy and holds a doctorate in conservation biology from the University of Minnesota.